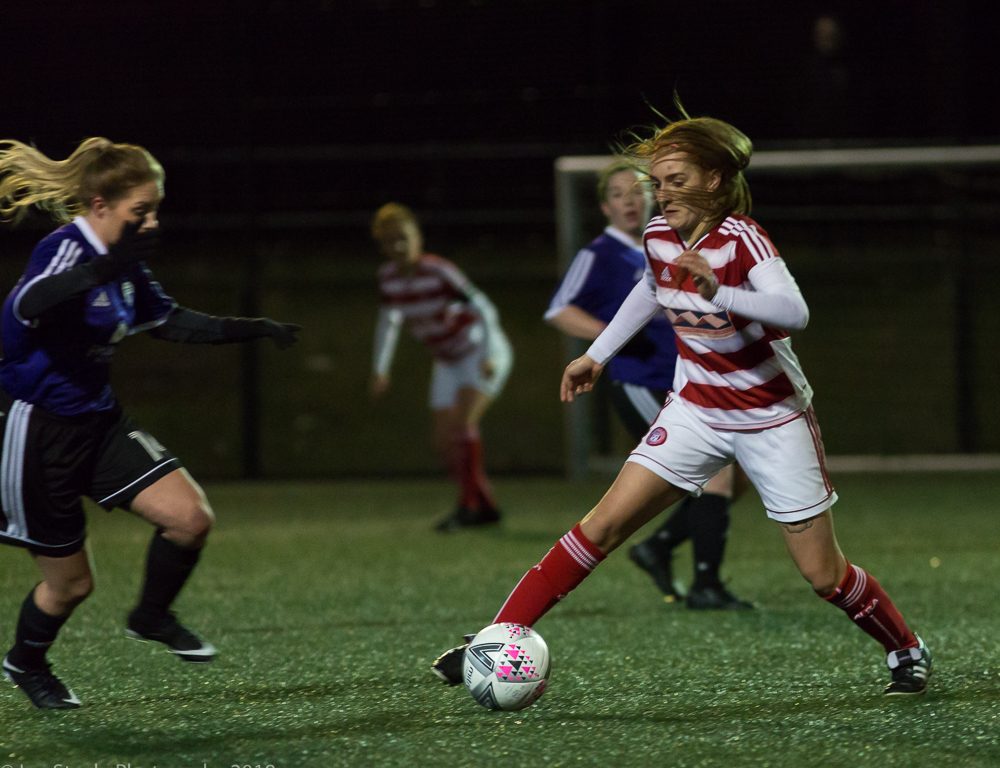 Accies Fight Back For A Point At Petershill

Amy Anderson’s second half penalty salvaged a point for Accies at Petershill to keep Gary Doctor’s side within sight of the top half of the table.

It has been a slow start to the season, with Accies still seeking their first win in Division 1. The coach was pleased at least that his side hung in to grind out a point in difficult conditions.

“I suppose in the end we’re reasonably pleased to get something out of the game. I thought a draw was pretty fair in the end.”

“We should play better than that, but given where we’ve been this season the confidence isn’t quite there yet. Second half performances have been a problem so far this season, so it was good that we changed that today.”

There wasn’t much in terms of silky football to be seen in the wintry conditions in the North of Glasgow. Neither side could get on top in midfield with chances few and far between in the game’s early stages.

Accies had the first sight of goal on 11 minutes, charging down a Glasgow clearance on the edge of the box, but Nichola Sturrock’s snapshot was just wide of the post.
The home side then came into the game, causing difficulties in testing conditions with a number of dangerous set-piece deliveries.

Kirsty Fraser came to the rescue shortly later, as Armitt swung a corner into the Accies box, getting a vital touch on the ball ahead of Mulligan to save an almost certain goal.

But the home side were in front on 27 minutes, Grant punching another dangerous set-piece clear. It sat up perfectly for Chloe Docherty on the edge of the box to launch a high shot into the net for the opener.

Accies should have been level in the run-up to half time, through a set piece of their own. The Glasgow defense struggled to clear Kirstie McIntosh’s flighted free kick, but neither Brown or Sloey could connect with opportunities to take advantage in the box.

Accies tried to turn the second half tide in wintry conditions but neither side showed much of an attacking presence. But perhaps improved match fitness finally told as Doctor’s side forced a leveler on 73 minutes.

Sturrock split the home defence with a first time ball for Connolly to chase down the right, with McTear’s lunging challenge deemed late and just inside the box. Captain Amy Anderson stepped up to level from the spot.

With neither side fashioning much in open play, a draw had an inevitable and fair look. But there was still work to do, Grant pulling off a fine stop with 3 minutes left, palming away a long range Docherty effort.

Accies move on to back to back home games starting at home to St Johnstone next week. The coach hopes it can kick start the season.

“Two home games are an opportunity for us to hopefully play the way we want to, dictating the game a bit more.”

“The big message over the next week is that St Johnstone offers the opportunity to go and control games going forward and play the way we want to.”