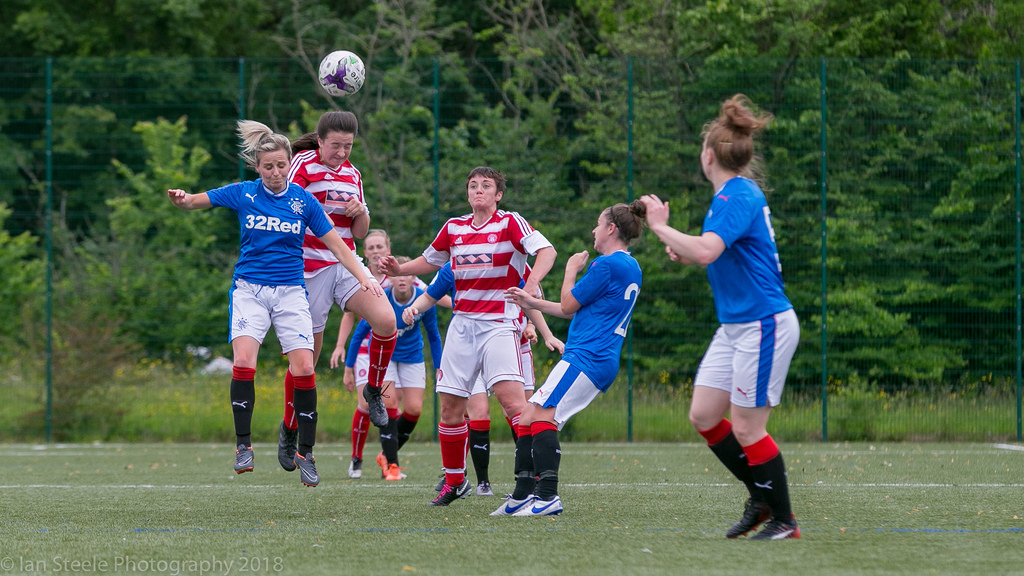 Inglis the hat trick hero as Accies advance to next round

A gruelling cup tie sprang to life late on as we made it safely through to the SWF Cup third round after extra time. Rangers thought a late goal had sunk Accies but Gill Inglis’s last gasp leveller forced the game into an additional half hour. It put the wind in our sails, and there was no looking back as the Accies captain went on to seal her hat trick and a memorable victory.

Accies now prepare to dig deep again on Wednesday night as we host champions Glasgow City in the league. Considering injuries and absentees in recent weeks coach Gary Doctor says the win is all the more impressive.

“Since Forfar a few weeks ago we’ve had concussions, injuries and people on holiday. It’s not been ideal preparation. It’s an amazing result considering all the problems we’ve had. Every single player today was excellent.” The manager says.

“We’ve played better football this season, but the personnel changes led to a different style and it’s paid off. We had to defend for spells and they had a lot of possession. It was important that we defended crosses and shots around the box, and I can’t fault anyone. Lauren Grant’s dealt with everything and Jade Lindsay probably played injured for 120 minutes, but been immense.”

“It was a real team effort. Gill will catch the eye with her three goals of course. I’ve talked to her about her attacking qualities and she showed what she can do when we changed our shape late on.” 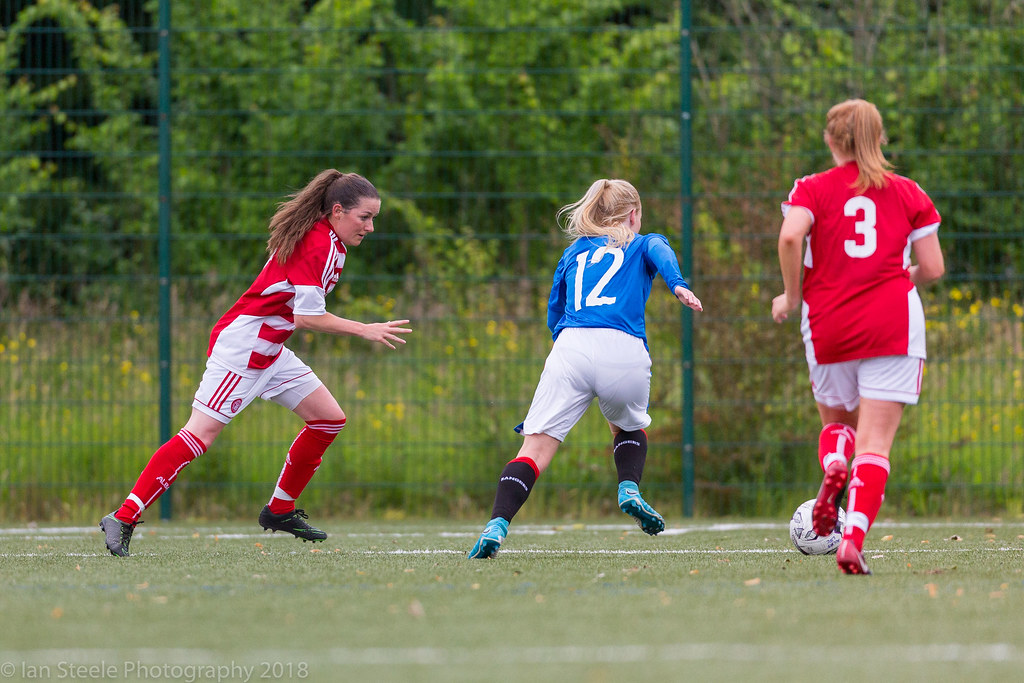 The Accies coach made four changes to lhis line up from two weeks ago, as Hay, Gardner, Anderson and Bulloch missing from the team which lost out at Forfar. Quinn, Shearer, Fitzsimmons and Lyle returned to bolster a depleted Accies side.

Likewise, it was four changes in our opponents’ ranks. Rae, Eddie, Robertson and Swanson started in place of Baillie, Coakley, Boyce and Jade Gallon, as the Glasgow club sought to build on their recent victory over Celtic.

Rangers just about had the better of the opening 45, with Lauren Grant the busier keeper, and Accies trying to play on the counter. Napier and Sinclair provided the early threat without finding a way past Grant, who showed good control of her penalty area.

But it was Accies who almost caught Rangers napping with the first real effort on 19 minutes, as Quigley got the edge of the box after a driving run. Having done the hard work, she pulled her effort just wide of Rae’s right-hand post. 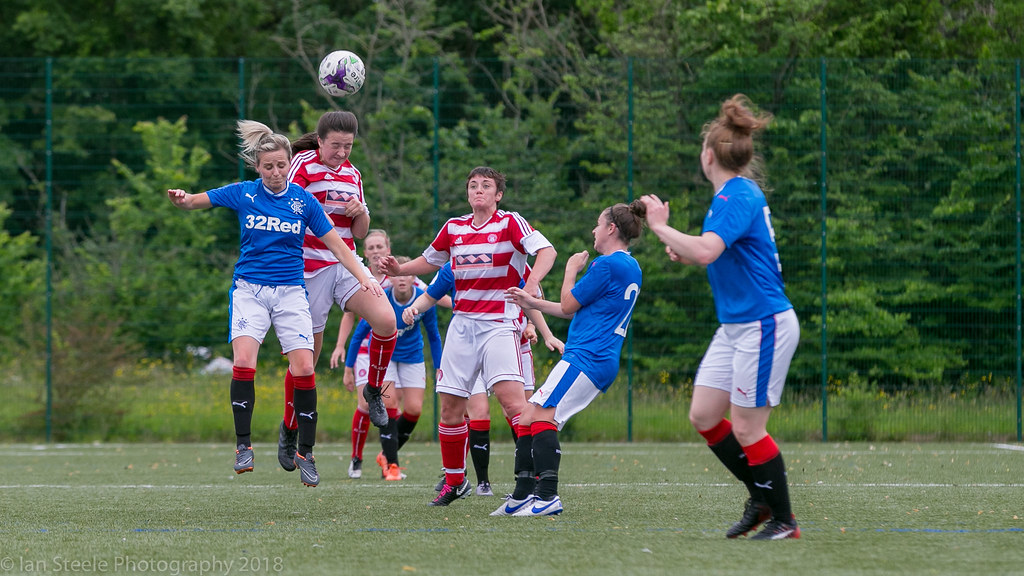 Rice followed up with a fine takedown and shot from the edge of the box, just over on 27 minutes, but the visitors looked to be in control for the remainder of the first 45.

Grant remained busy, making amends on 36 minutes to hold onto a Napier shot from close range, having spilled a Muir cross. Robertson forced another good stop on 41 minutes as Rangers continued to press, and Accies sought to dig in until the break.

The pattern continued into the second half, with Gemmell and Napier having efforts from distance. But Rangers started to look a frustrated side as Accies hung in and defended resolutely.

But just when we thought this one was going the distance the visitors had their goal on 84 minutes. Sub Chantelle Brown laid a high ball off for Sinclair on the edge of the box to beat Grant with a low drive into the corner.

We might have been tired and deflated in response but going behind had the opposite effect, as Accies levelled two minutes from time. Accies threw numbers forward and Inglis found herself in space inside the box to rattle a striker’s finish past Rae to force extra time.

It gave Accies that spring in the step, with Ranger looking the leggier of the sides, and Inglis went on to put Accies in front 12 minutes into extra time. Anderson launched a long through ball to the byeline, for the captain to get a cross in. She found Rice in the box, but the shot struck a Rangers hand and we had our first spot kick since 2016.

Inglis stepped up to fire us in front, before adding the third in style with 5 minutes to play. It was another fine instinctive finish as she took a high Quinn ball down inside the box to fire high past Rae.

A great win for Accies, but it may take its toll on the starting line up for Wednesday, with the Accies coach considering changes, with two big league, comes to come in four days.

“This week just got harder,”, the Accies coach says. “We play Rangers again in the league next week, and they’ll certainly be motivated after today. Playing the extra half hour makes it tough going against Glasgow City on Wednesday. It’s as tough as they come after just playing 120 minutes.”

“There will be changes on Wednesday, with different availability issues we have. We have no choice to rotate the squad. We’ve just got to take the confidence, the belief and togetherness shown today and stick it together for these two huge league games.”