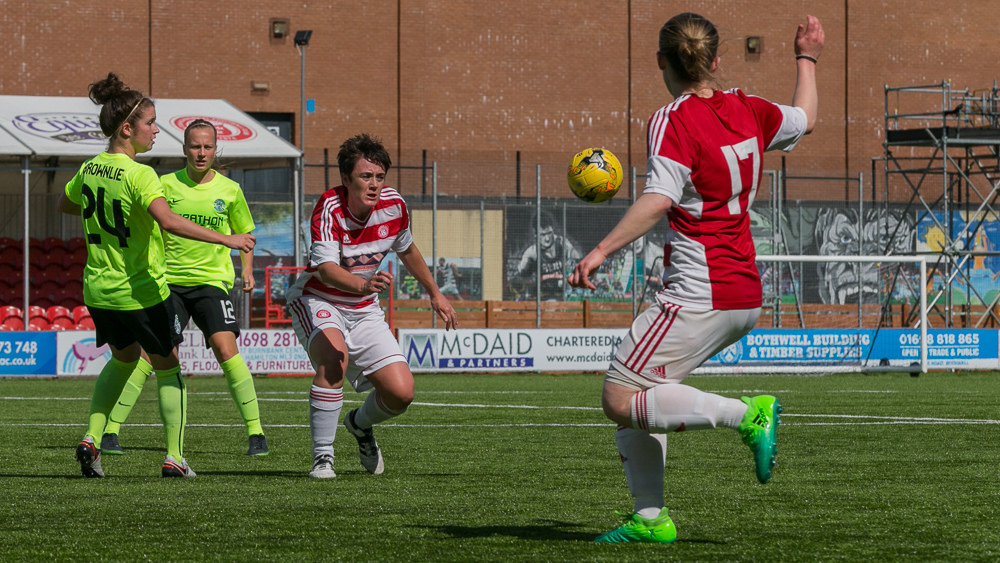 A threadbare Accies squad was up against it for the trip to championship chasing Hibs, but despite Sunday’s loss coach Gary Doctor sees grounds for encouragement as we battle to beat the SWPL drop.

Missing 8 regular first-team picks for Ainslie Park, Doctor added four youth players to his squad. Emily Shearer, Megan Quigley and Teagan McCann and Lauren Simpson each had their debut, and played their part in frustrating the Edinburgh for side for the opening 45 minutes, with Accies just a goal down at the break.

Hibs, in the end, had too much going forward, as 3 second-half goals secured the win, but the performance of his makeshift team has given the Accies coach food for thought.

“You know what, there are some first team players who have a lot to do to get back into the team because the players who came in today were excellent and never let us down. “, he says.

“My team was all a bit thrown together, but for us to be that well organised just shows the potential that we have, and how hard they wanted to try for the team today.”

“When you consider my full first team lost 6-0 here earlier in the season, I think it says a lot about the first team spirit that we have. We’ve lost the game, but we can be pleased with how the players performed given the circumstances.”

As anticipated Accies were on the back foot from the first whistle, as Hibs dominated possession with a stiff breeze in their favour. And we might have feared the worst when the hosts broke the early deadlock on 8 minutes. With space to shoot Chelsea Cornet fired a shot off the woodwork, the ball rebounding perfectly for Amy Gallacher to knock into an unguarded Accies net.

But the floodgates didn’t open, Accies defending compactly and in numbers. Hibs continued to have the bulk of possession but couldn’t find a way through, often reduced to efforts from long range. Shannon Leishman’s effort though on 16 minutes was parried to safety by Fleming on 16 minutes, with Katey Turner almost pulling off the spectacular with a looping effort from 30 yards which landed on top of the Accies net.

We hadn’t offered much by way of attacking response, Carolina Richardson an often isolated figure up front, but Accies kept their concentration and morale going for the rest of the half, with Jade Lindsay and Teigan McCann forming a solid pairing at the back.

Playing into the wind, the ball held up more kindly for Hibs in the second half, finally establishing the two-goal cushion on 49 minutes. There was an element of fortune to it, as Katey Turner volleyed Abi Harrison’s byeline cross off Laura Gallen and in at the near post.

The third arrived ten minutes later, Emma Brownlie once more getting to the byeline to cut back for Shannon Leishman at the far post to tap home her first goal for her club.

We continued to close down well in midfield though, with concentration maintained at set pieces. It was another flowing Hibs move down the right which completed the scoring 12 minutes from time. Brownlie was again the architect as she squared for Turner to net her second of the game.

We made an enforced change with 5 minutes left, keeper Elaine Fleming replaced by Lauren Grant. And the stand-in stopper pulled off a fine save in the closing minutes to deny Cornet and Hibs a more emphatic looking victory.

As it is we now put a challenging run of games behind us, having faced the top 3 sides in the league in recent weeks. Next up is the visit of Aberdeen to New Douglas Park on Sunday, a match which could decide our league fate. The Accies coach points out that our destiny is still in our own hands.

“We have the remaining six fixtures against teams we’d fancy getting something against. As much as Aberdeen’s a big game, it’s not the only game. If we show the kind of endeavour and potential as we did today, I think there are points to be gained.”