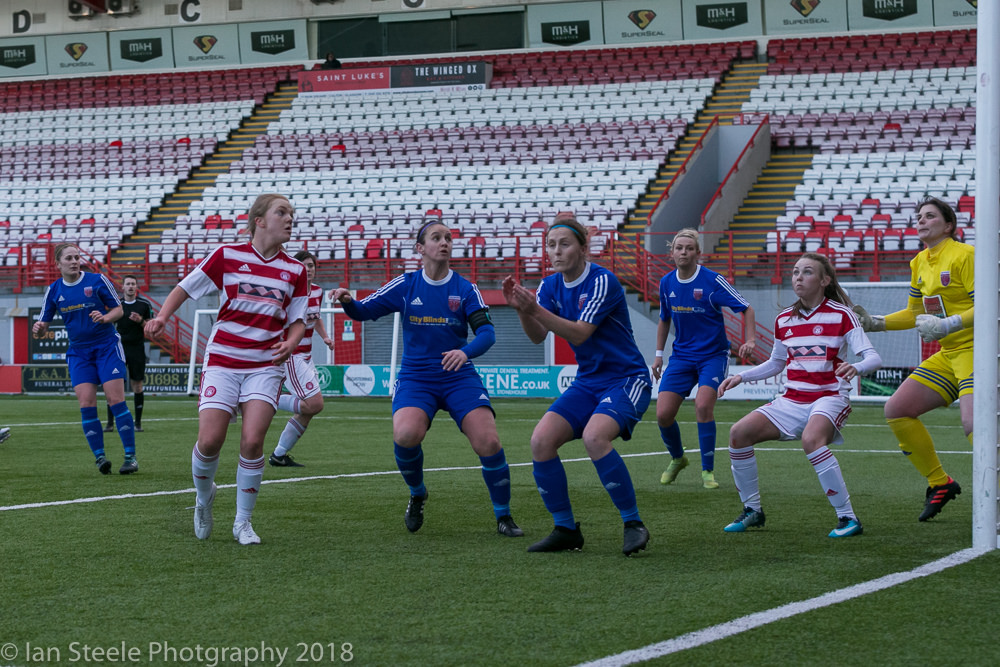 Accies narrowly slumped to defeat in a contest that could and perhaps should have been shared with the Hamilton side being denied what looked like a stonewall penalty in the closing stages of the match.

With the game in the balance, a rash challenge from Fiona McNicoll in the Forfar goal looked to have given away the spot kick but the referee waved it away despite protests from the Accies bench and a look of disbelief from the Forfar dugout.

Assistant Manager Robert Watson: “I think it was a pretty clear penalty which came at a point we had all the momentum in the game. Even Mark (Nisbet, Forfar Manager) said as much at the time and his own post-match comments.

“It’s a disappointing result considering how well we have played for large parts of the game. We have to concentrate better at re-starts as we lost all initiative within a minute of the second half with some poor defending.

“On the other side, the goal Katie scored was a fantastic move from us so it is really pleasing to see that work put into practice. We have a real threat going forwards now and that’s down to the hard work being put in on the training ground both by the attacking players and the defending players pushing the attack to be better.

“We have shown this year we can stand up to anyone in the division and if anything, today shows how fine the margins are between every side outside of the top 2. Let’s make no mistake, Forfar are a good side. Mark has recruited well and credit to their start this year but I do feel in both games against them points shared would have been the right results on the balance of play. However, it is up to us to change that. We are moving in the right direction”.

With the 1st half being a balanced affair with chances at a premium, the second half exploded into life a minute after the restart with Robyn Smith rifling home after Fraser had misjudged a bouncing ball.

With the home side trying to pile the pressure forcing Grant into a good tip round the post from a Davidson free kick, they were undone by an incredible counter-attack with Gardner racing away on the left after picking up a clearance from just outside her own box before cutting back to Rice to blast the ball home past the helpless McNicoll.

With the game poised at 1-1, there was no love lost as both sides battled to get the advantage and the referee let both teams away with some heavy challenges which could, and should, have seen yellows.

However, it was Forfar who took the lead when Megan McCarthy got free in the box and looped a header over Grant after getting onto the end of a Davidson free kick to make it 2-1.

Accies responded by immediately throwing last weeks hero Megan Quigley in and started pushing the Forfar backline who could now clear their lines and play more on the counter-attack.

Bulloch went close following an excellent through ball from Inglis blasted at the goalkeeper before a series of corners came to nothing then the penalty shout which was waved away.

Rice then went close again after being scythed down on the edge of the box before crashing a free kick towards goal which bounced off McCarthy’s arm but the referee again waved away protests.

Bulloch almost drew the tie level in injury time with a delightful chip over the goalkeeper which bounced off the bar and clear of the on-rushing support before Fraser headed a glorious chance wide at the death.