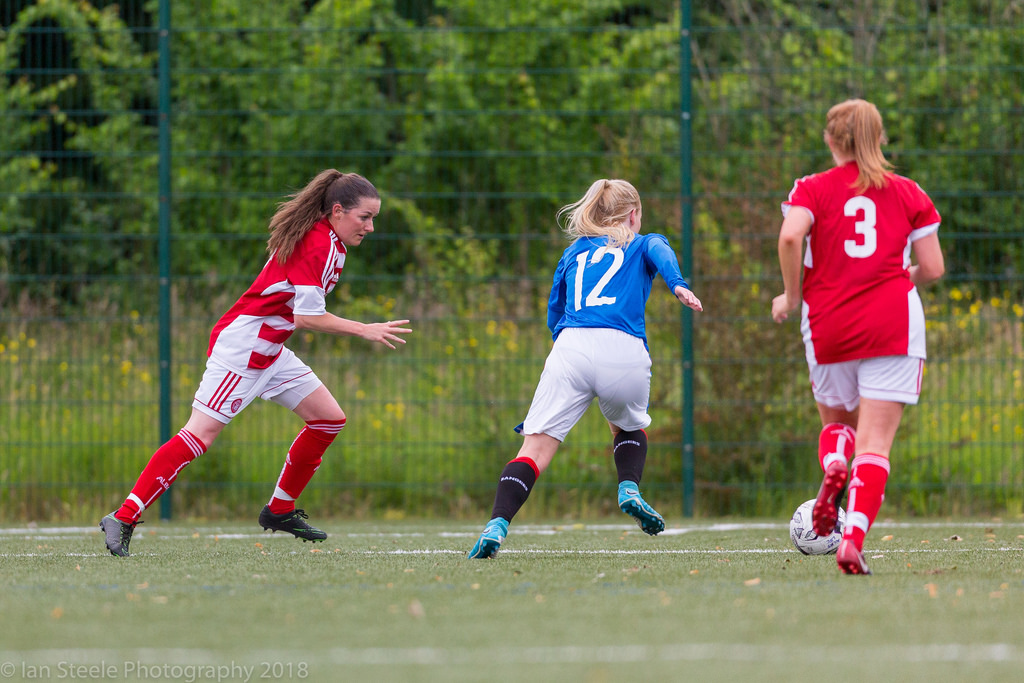 It looked a forlorn task and our worst fears were finally confirmed. Sunday’s 5-2 loss at Rangers coupled with another win for Spartans relegates us with two games to spare. Three goals down after a horror opening at New Tinto Park, it rapidly became an operation to salvage some pride. Once again this season coach Gary Doctor watched on as his side gave themselves too much do to save themselves.

“It was a crazy first 25 minutes. We’re having to chase the game here after just two minutes. We had chances to equalise in that spell, more than them I think. But Rangers punished us by taking their opportunities.”

“Ultimately we’ve not scrambled points earlier this season when we should have. It left us with a mountain to climb. I’m disappointed for the players who have put in so much hard work. We restored some pride in the second half, but in the end, we haven’t been good enough today and throughout the season.”

We made just one change from last week’s fighting display against Hibs. Megan Quinn returned from suspension in place of Nina Fitzimmons. Rangers made two changes from last weekend, as Baillie replaced Ramsay in goal, and Robertson took the place of Brown. Ex Accies captain Gill Inglis lined up against her former teammates for the first time.

The home side’s last 3 points came against us in the league fixture in June. And they were gifted an early stranglehold of the game, as slack defending put them virtually out of sight in a half hour goal blitz.

The first arrived just two minutes in, as Claire Gemmell floated a ball into the Accies box. Carla Boyce shrugged off Kirsty Fraser’s challenge to beat Grant from a tight angle. Accies looked a touch shell-shocked and duly fell further behind on 16 minutes after a slick Rangers move down the right. Brogan Hay’s cut back was perfect for Jade Gallon to score at the near post.

Scoring next was vital to rescue any fading hopes, and Lori Gardner passed up a golden chance on 22 minutes, with just the keeper to beat from Hay’s through ball. Instead, Rangers were to extend their lead 3 minutes later, Claire Gemmell heading a corner home at the near post.

Hopes were fading fast but Gardner reduced arrears on 58 minutes, volleying home a rebound inside the box after Baillie had spilled Vaz Lyle’s initial attempt.

But once again slack defending undid the good work at the other end of the pitch. Robertson was allowed space and time to pick a pass from the right side of the box, with Accies missing two opportunities to clear their lines. It was gift wrapped for Boyce to tap home her second on 61 minutes and restore the 3 goal advantage.

Gardner scrambled home her 8th of the season on 69 minutes from a corner kick, as Accies kept fighting lost causes. But Gemmell wrapped things up for Rangers with a powerful effort past Grant with two minutes on the clock.

The post-mortems will soon begin as we now prepare for life down a division next season. Before that Accies have two remaining fixtures to show some pride. Stirling University visit the Hope CBD Stadium on 21st October before our campaign ends at Forfar Farmington on October 28th.