Another league setback now gives us two weeks to lick our wounds at the foot of the table, still seeking that elusive first win or goal to kick-start the season. It was an emphatic victory for the visitors in the end which closed their deficit on the top 3 to just a point. For Accies, it is no comfort that the scoreline might have been flattering to Rangers. We competed well for long phases of the game, Claire’s Gemmell’s delightful free-kick being all that separated the sides until the hour mark.

This was to be an all familiar tale for Gary Doctor and his players in the second half, chasing a game once again and vulnerable to the sucker punch. It duly came courtesy of a fine long-range strike from Sarah Robertson on 63 minutes. Gemmell was to extinguish any remaining Accies hope with her second of the game in the closing 10 minutes before Brogan Hay topped things off with a fourth in the closing stages.

After a fifth straight league defeat, the Accies coach is seeing a worrying pattern already developing, as we struggle to keep pace with the sides above us in the SWPL1 table.
“We’re in a bit of a rut and need to find our way out of it. Today was a bit like most games this season. We’ve struggled to get ourselves going at the start, while Rangers weren’t really cutting us open either. We went behind to a lovely free kick, and whenever we have to chase the game we give up soft goals.” 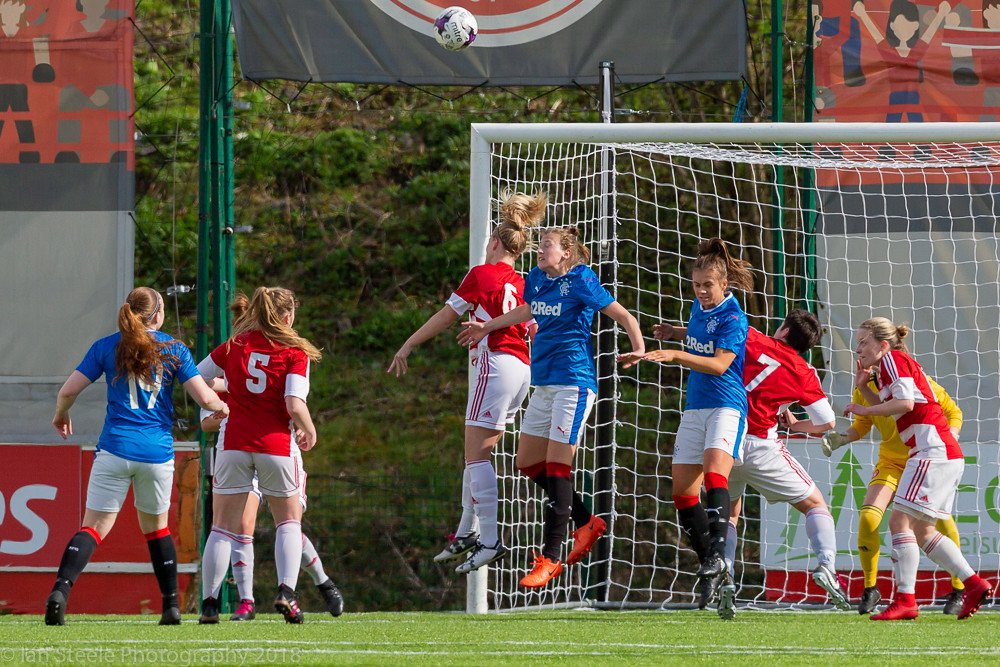 “We were well in the game until the second goal. We’ve tried to mix it up after that, and Rangers have exploited the gaps we leave at the back. Everybody is really down and disappointed. Maybe our expectations were too high at the start of the season. Today is not fatal, but we need to do something to get ourselves going.”, Doctor said post-match.

After the defeat last week, the Accies coach had hoped for a different outcome with an unchanged starting line up from Celtic’s visit to New Douglas Park. Rangers meanwhile made five changes, as they sought to emulate their 4-0 victory over Stirling University. In came Baillie, Napier, Swanson, Sinclair and Donnelly for Amy McDonald’s on form side.

Crucially Accies just couldn’t get their noses in front, and Rangers began to control the game ominously in the early stages. We were lucky to escape on 8 minutes after struggling to clear our lines twice, the ball ping-ponging around and Gemmell unable to capitalise inside the box for the visitors.
She made amends though on 18 minutes after Kirsty Fraser had handballed on the edge of her box to give Rangers a free kick 25 yards out. Gemmell lined the shot up to her left, but slightly wrong-footed Carys Hopkins with a delightful right foot chip around the Accies wall and into the top right-hand corner for the opener. 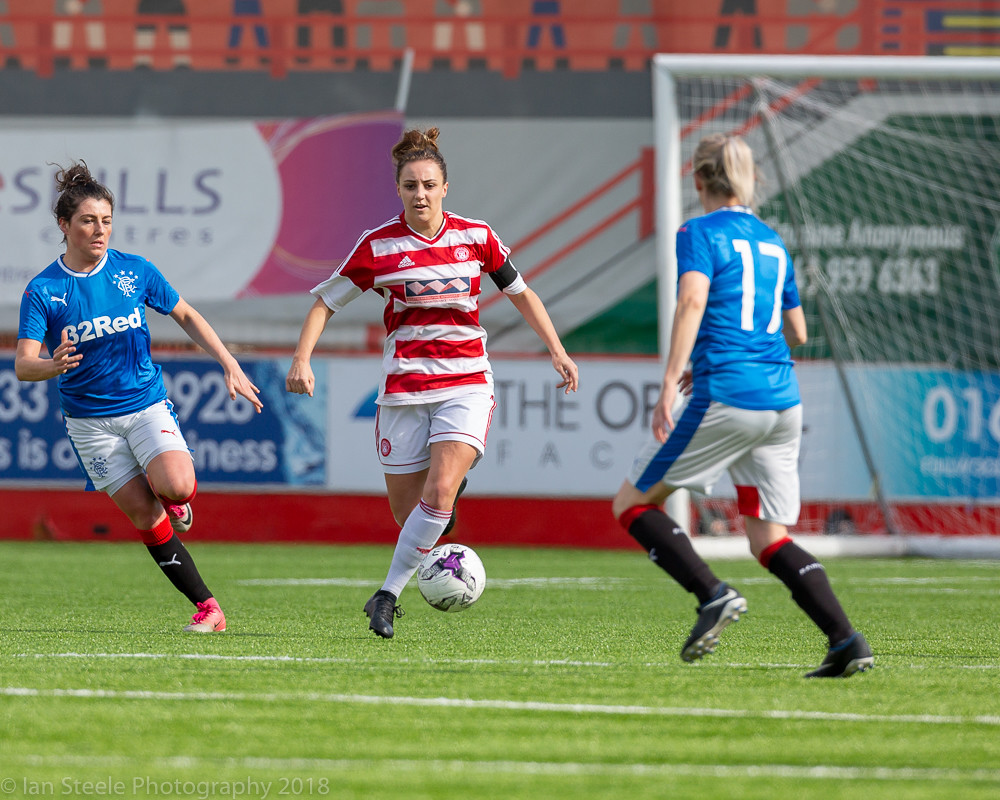 Only then did Accies look like doing something at the other end, with Lori Gardner getting into some attacking areas. A good run and lay off for Katie Rice on 23 minutes was our most promising move of the half, but the Accies forward was unable to seriously work Baillie with her effort on target.
Rangers were controlling much the game for long spells, making good use of the width of the pitch, without really cutting Accies open. We meanwhile couldn’t find the passes to supply Gardner and Rice up front, toiling to carve out any meaningful chances.

A tall order becomes even tougher as Rangers added a second goal just after the hour mark. Accies were looking vulnerable down the left flank, and Jade Gallon’s long floated ball over the top found Robertson on the corner of the Accies box. Controlling the ball and cutting onto her better foot, her powerful strike flew high past Hopkins from the edge of the box. 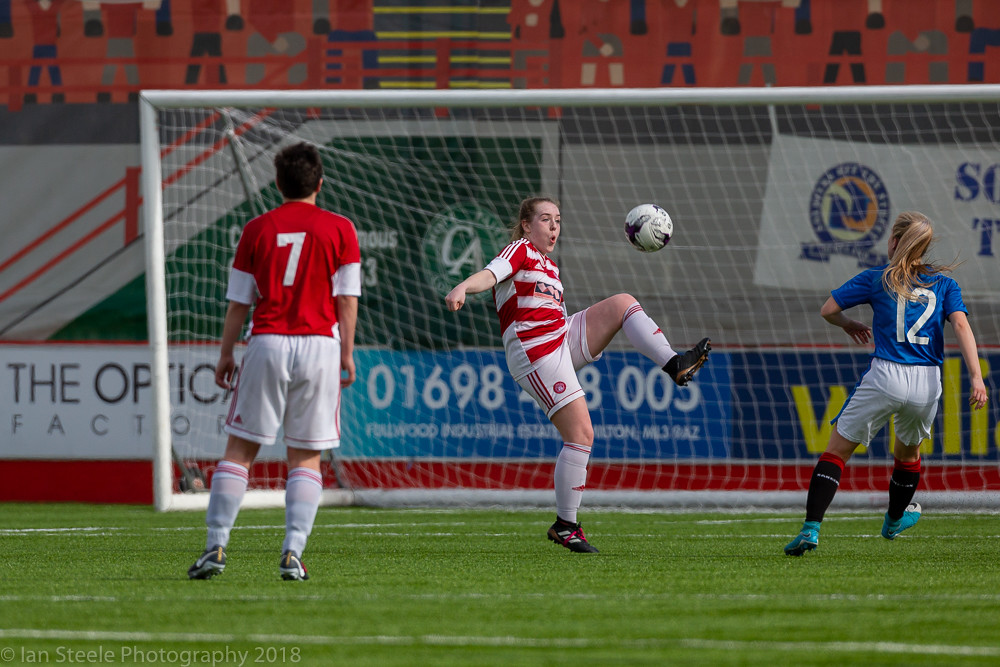 And from the same area, Gemmell killed the game off with her second, Gallon picking her out in space with a cross into the box to despatch low from close range. It was to be a day of mixed fortunes for the Hay family, with substitute Brogan coming on against her sister Kodie to beat the offside trap, scoring with a stylish finish with two minutes left on the clock.