Accies Show Their Spirit But Survival Hopes Hang By A Thread

The cold facts are that Accies sit 5 adrift at the bottom, with a much inferior goal difference to Spartans, and with just three games left. Defeat to Hibs on Sunday leaves Gary Doctor’s side with a mountain to climb to preserve SWPL1 status for another season.  Despite pushing the title chasers all the way, the coach concedes it’s going to be a tall order now.

“It’s going to be tough for us, with Spartans winning today. The way the fixtures have worked out has been in their favour a bit. We’re capable of the winning the games we have left, but it’ll be a great escape to do it from here.”

“We can still take a lot of belief from today in the way we’ve restricted a top team. That was a very young side we had out there today, but it’s the best we’ve played against Hibs, certainly this season.” 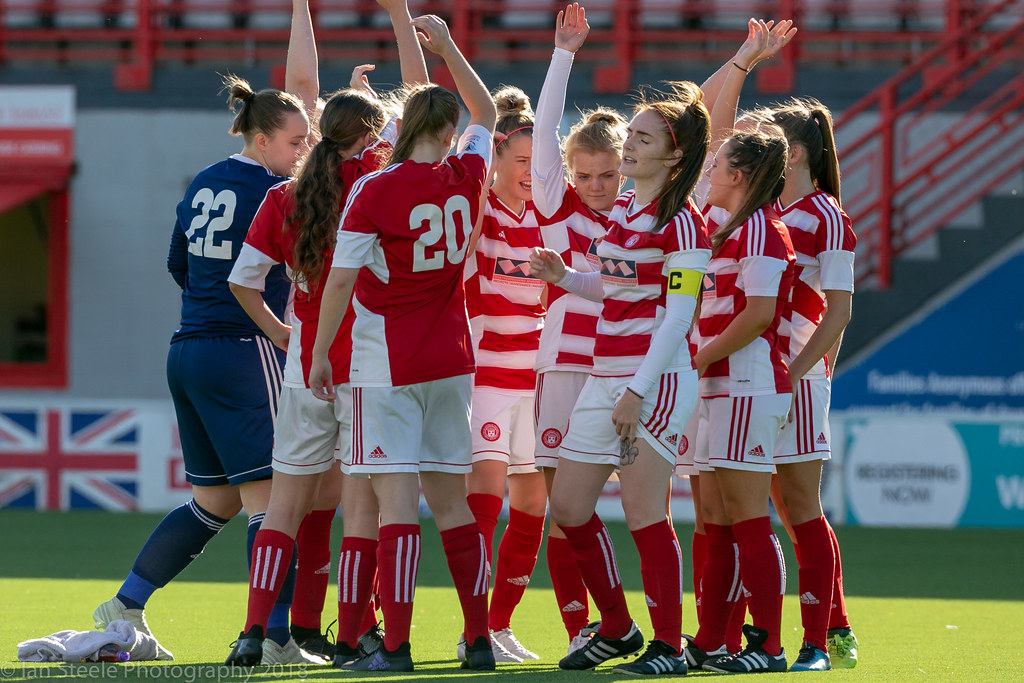 “We’re on a good run in terms of consecutive goals at the moment. It was good to see our work on corners through the week pay off with Rachel’s goal. Lori’s also shown great composure for her goal.”

“Unfortunately we’ve undone a lot of good work at the other end. The third goal has been one we have conceded far too many of this season, an own goal from a clearance inside the box.”

The visitors had arrived with priorities of their own, keen to make up goal difference in their tussle with Glasgow City for the title.  Abby Harrison’s 12th-minute opener they seemed to set their script in motion, but Accies showed their mettle to level 5 minutes later, Rachel Ross heading home her first goal for the club from Rice’s corner kick. 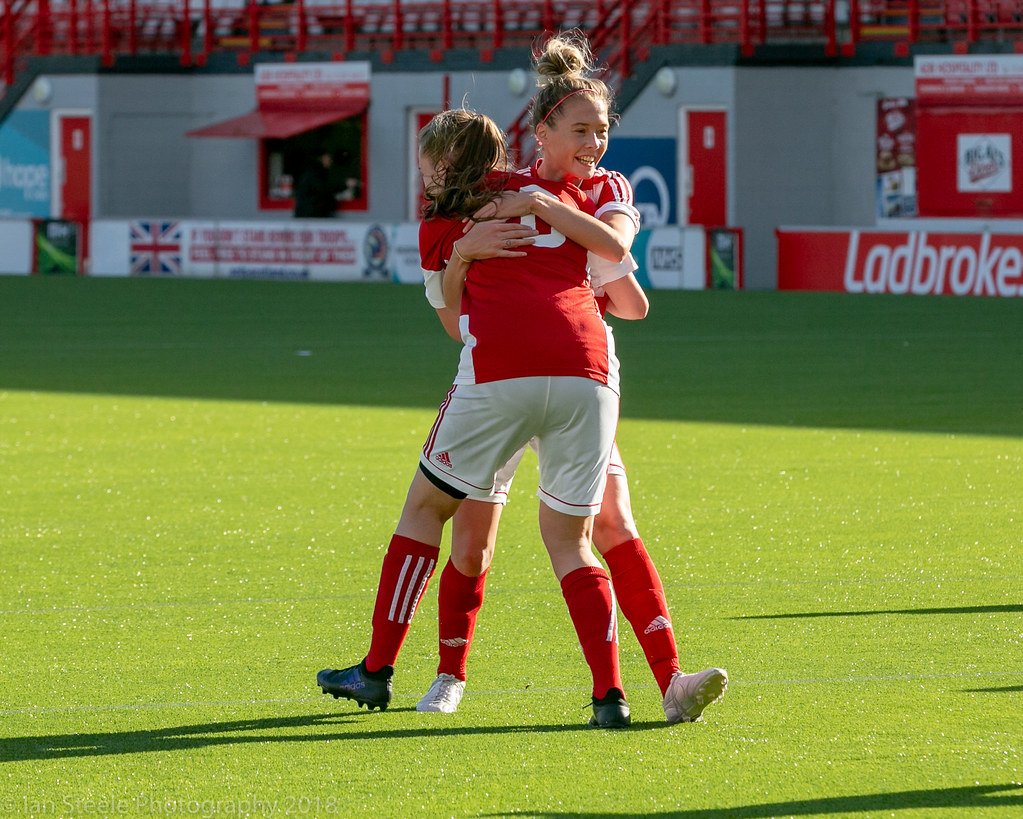 But Hibs continued to dominate possession and were ahead again on 24 minutes. Emma Brownlie swung a ball in for Cailin Michie from the right and bundled home at the rebound after Grant had stopped her first effort.

Accies were hanging on with Grant to thank for the remainder of the half. The woodwork came to the rescue on 29 minutes, after an audacious overhead from Shannon MacGregor on the corner of the box. The Accies keeper then pulled off fingertip reflexes to tip Jamie Lee Napier’s goal-bound shot around the post on 40 minutes.

Having restricted our goal hungry opponents we then gifted the visitors their third goal two minutes after the break. A scramble in the box ensued after Lisa Robertson’s run into the Accies box, and Ross miscued her clearance past a helpless Grant. A sixth Accies own goal this season.

We were still up for the scrap though and kept good shape and discipline, continuing to restrict Hibs to shots from around the box. We then reduced the arrears on 63 minutes to give ourselves a ray of hope. 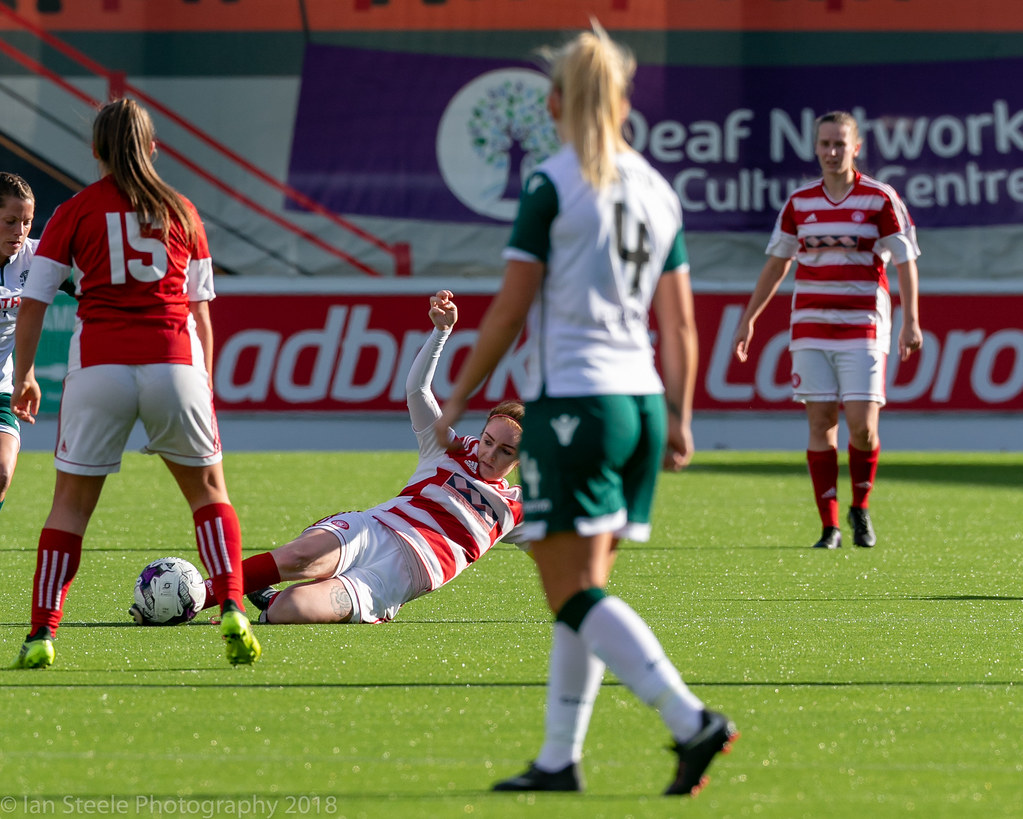 It was Gardner who started the move with a great lay off, before receiving McIntosh’s return ball inside the Hibs box. Fife stopped the first effort, but the ball broke nicely for the Accies forward to net her sixth goal of the season.

We kept battling away, throwing numbers forward in the latter stages, but Hibs finally put the game beyond us on 83 minutes. Napier’s through ball found Harrison inside the box to sweep home first time past Grant at her far post.

With Hibs looking for goals it was not the result either side will have wanted. We go again on Sunday at Rangers, knowing that only a win will give us any survival chance. The coach is under no illusions now about the task ahead.

“If we keep this performance level up, with at least a player back, we’ll have a bit more belief that we can do it. We’re capable of winning the games left, but it’s going to be very hard. We just have to try and win out to the end of the season now and see what happens.”