Dozen Of The Best Sends Accies Up Table

A comfortable victory over Hutchison Vale at New Douglas Park moves Accies up to the third spot in SWPL 2. It hasn’t all been plain sailing 4 games in, so a thumping win like this was just what the doctor ordered.

Cruising at half time through Jade Lindsay’s opener and an Amy Anderson double, the roof fell in on the visitors in the second half. Nichola Sturrock’s hat trick was followed by goals from recent signings Chloe Muir and MT Gardiner, before subs, Amy Bulloch and Dionne Brown helped themselves to a brace each.

Assistant coach Bobby Watson was delighted with the performance and an emphatic three points. He wants the players to now use this as the Launchpad for a successful season.

“With results elsewhere, it was important that we delivered today. I wouldn’t say we’ve been down, but our confidence hasn’t been the highest. It’s great to put a good score on the board today with so many different scorers. It was good to keep a clean sheet.”, he says. 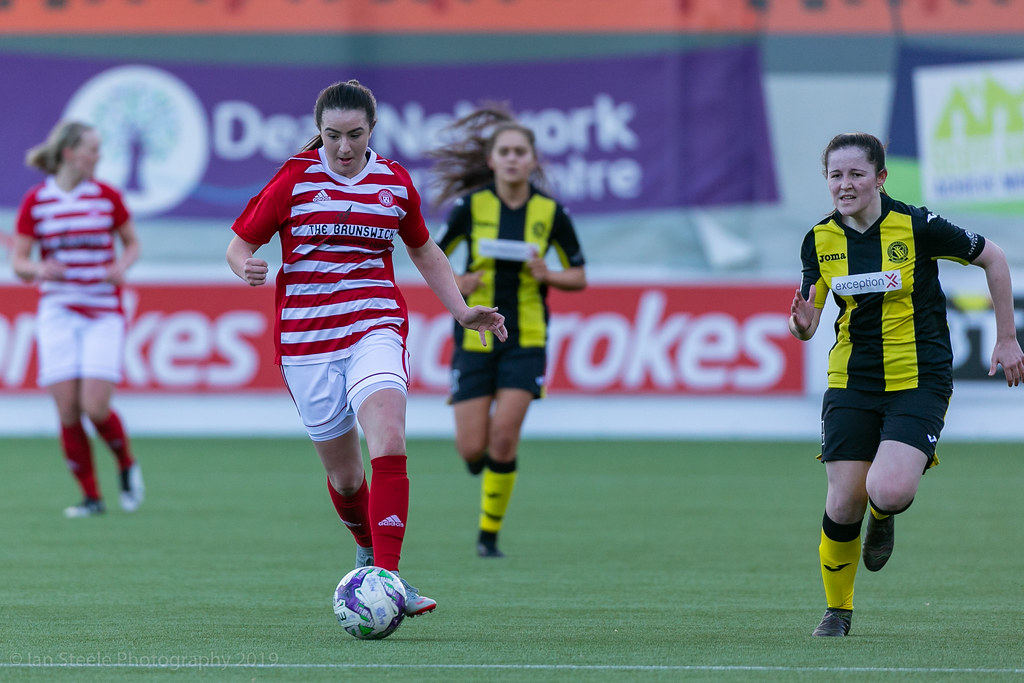 Gary Doctor’s one change to his line up from last weekend saw Chloe Muir start in place of Dionne Brown in an attacking formation. Accies weren’t going to be holding back in this one.

Jade Lindsay got us off and running on 13 minutes, nicking in front of Whitaker to nod Kirstie McIntosh’s free kick home for the opener. Duncan then handled Amy Anderson’s through ball in the box for a stonewall spot-kick, which the Accies captain smashed home for number two on 20 minutes.

But for a few Hutchie breakaways Accies were well on top, flooding forward at every opportunity. A well-timed run into the box saw Anderson volley home her second from Soley’s cross on 34 minutes. Sturrock might have added another a minute later, Whitaker punching her long-range effort away as Hutchie survived further first-half damage.

Accies came out back out raring to go, and had rattled in three more within 10 minutes of the restart. Sturrock had her first on 49 minutes, rifling home after a Sloey rebound landed at her feet. Muir headed home number 5 just 90 seconds later, as Accies worked the space down the left for Quigley to cross.

The pick of the bunch arrived on 54 minutes, as Sturrock picked up the ball in midfield to launch a stunning 35 yard chip past Whitaker for number 6. And she completed a thirteen-minute hat trick on 62 minutes, as the Hutchie keeper misjudged Ellie Kane’s through ball, allowing Sturrock to tap into the empty net.

Accies went on to pepper the goal of our demoralised opponents, Sub MT Gardiner quickly added another, clean through on goal with a composed finish.

Dionne Brown tapped home number nine 5 minutes after coming on, after Whitaker had blocked Amy Bulloch’s initial effort. But Bulloch was in on the act on 76 minutes later with a chip from just inside the box as Accies hit double figures.

Bulloch had a tap in on 80 minutes after Brown’s header had come off the post, but her fellow subrounded the scoring off 5 minutes from time, heading home after a goalmouth scramble.