Katie Rice’s long range strike 3 minutes from time hauls Accies the foot of SWPL 1, as Gary Doctor’s side came from behind to defeat Stirling University at Bothwellhaugh.
We had the better of the match for the opening hour but Rebecca Galbraith’s bullet header put the visitors in front. Losing that opening goal has often been fatal this season but Accies though showed their fighting spirit to level through sub Megan Quigley’s first senior goal, before Rice’s speculative spectacular secured all three points.

It sets us up well for the visit to surprise SWPL package Forfar Farmington this weekend. And the Accies coach is also pleased to see his side finally looking stronger in attacking areas of the pitch.
“We’ve been much better up front in the last 3 or 4 weeks. I’ve been encouraging players to take on more shots and Katie Rice is someone who brings that. She is a player I have a lot of belief in, but also carries that unpredictable side to take shots on. That’s something we’ve missed these last few years.”

“I’m delighted for Megan. She is a player we have high hopes for, and I think bringing her and Amy Bulloch on really helped turn the game back in our favour.”
“We’ve made chances in the first half and were pretty dominant. Coming in at halftime it was about keeping the players up having not gone ahead. Overall we could have won this more convincingly but 3 points puts us in a much better position ahead of next week.” 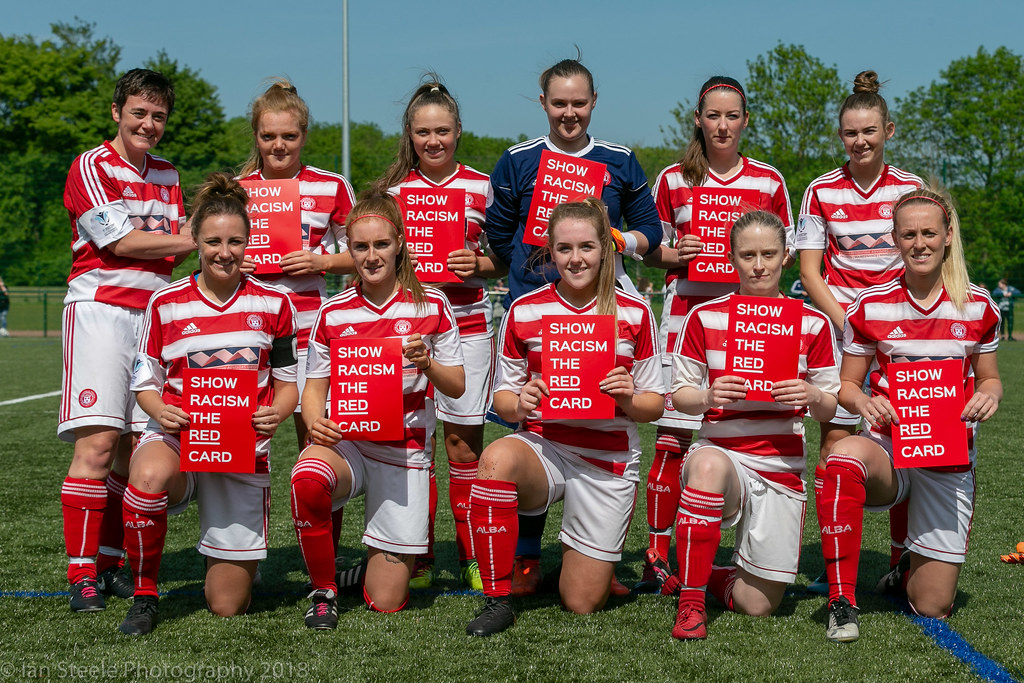 Accies were out to avenge a 3-0 reverse in this fixture in April, and made all the early running, with efforts from Kodie Hay and Lori Gardner just off target.
Gardener and Gill Inglis were making good use of the whole pitch as we stretched the Stirling back line. The visitors somehow survived a few goalmouth scrambles as Accies cranked up the pressure, with Logan pulling off an unbelievable stop to deny Hay at close range.

The pattern continued into the second half, and Accies then came within the width of the crossbar from taking the lead, Emma Lyons taking a long ball down on the edge of the box only to see her powerful strike crack off the outside of the upright on 56 minutes.

And Stirling made Accies rue these misses to take the lead just after the hour mark, with Galbraith powering home a header from Beth McKay’s corner kick.
It marked a rocky spell, with Grant getting across well to tip behind an edge of box Reynolds shot a minute later. Gaps were opening up as we went for broke, with Grant again to the rescue, quick off her line to close down Galbraith on the edge of the box from a through ball on 75 minutes

But the Accies heads didn’t drop. Doctor’s double substitution freshened things up as we hoped for a change of fortune. And the deserved leveller arrived on 78 minutes, Katie Rice coming up against a packed Stirling defence, but able to pick out Quigley. With a low drive, she found Logan’s bottom left corner for her first Accies senior goal.
The stage was set for Rice’s grand finale 3 minutes from the end, taking the ball down 35 yards out to try one from long range. Logan lost her footing and could only watch as the ball dropped agonizingly into the net.