With the new season suddenly just around the corner Accies continued their pre-season, welcoming Hearts Ladies to Superseal Stadium. It was a different story to last weekend, running in the goals against Dundee Utd in a 9-1 rout. This time out they were up against the team they pipped to the championship last season, and Hearts were to enjoy a last gasp victory. 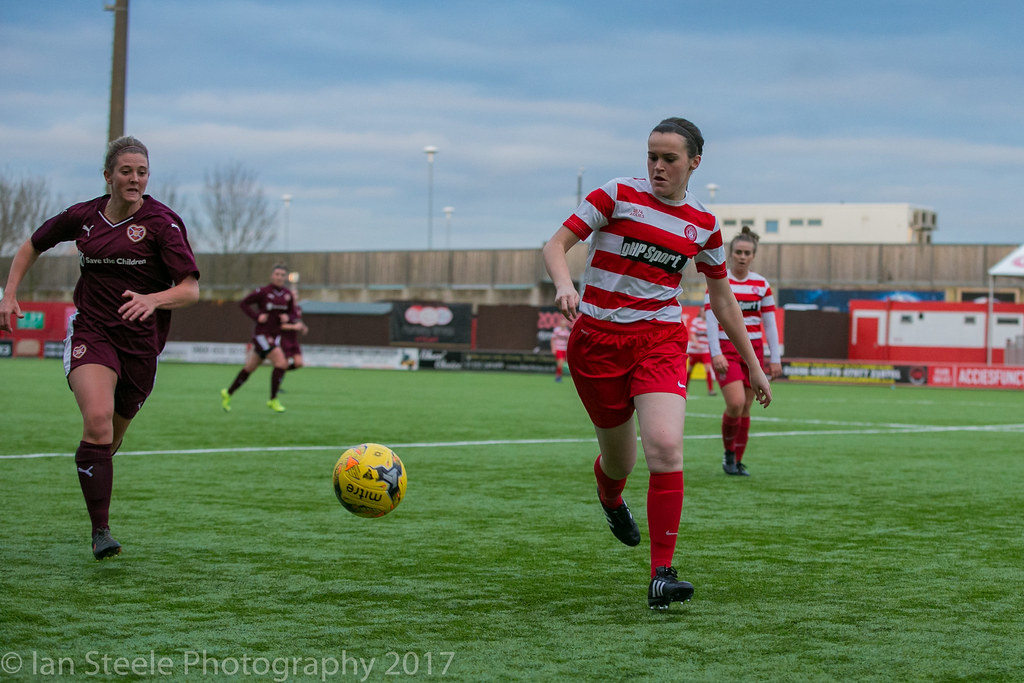 A late strike from Jennifer Dodds was all that separated the sides, but the two meet again in a fortnight, and this time competitively in the opening round of the League Cup. Accies coach Bobby Watson is more than confident his side will be ready for the big kick off when the results count.

“It was a very different sort of game to last weekend”, he says. “We really dominated the ball last week but Hearts brought different challenges to this game for us I still thought we were the dominant side. Despite the result I felt this was a good stepping stone towards what will be a really tough season coming up.”

“Today was an improvement again in terms of moving the ball better under pressure. I’m confident we will get better in time for the league cup tie and the start of the league season next month. We were champions last year for a reason and we have it in us to improve.”

The Accies coach knows his side can adapt to the top league but also wants to keep feet on the ground:  “Everyone is fit and ready to go and we’re really happy with how things are progressing. First and foremost our target is to stay in the division. We’ll build on it from there. Going in against such quality it would be foolish to set any unrealistic targets at this stage.” 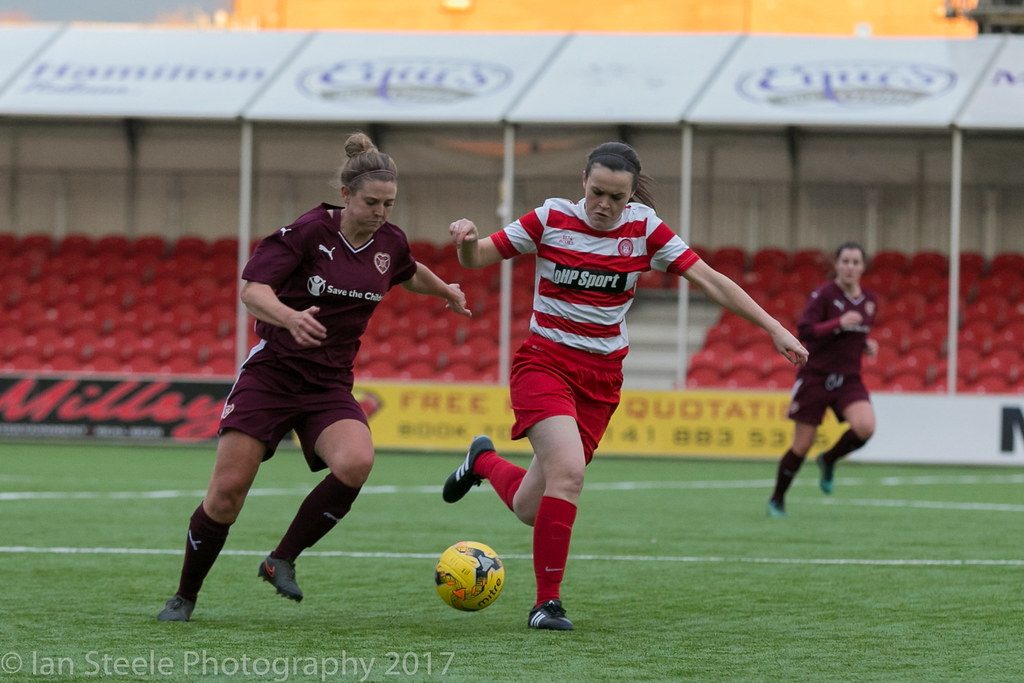 Hamilton continue pressure on the ball

Midfielder Lauren Kerr shares her coach’s cautious optimism about the season ahead:

“Personally I’m really looking forward to it all, going up against Scotland internationals in the top division. It’s going to be a great challenge. We have a good squad here, with competition for places too.” she says.

“Pre-season has been good. We’ve lots of high intensity drills and we’re working hard because we know higher level we need to reach in this league. Everybody’s motivated so we’re going to go for it.”

For the match itself Kerr and her team mates undoubtedly felt they should have taken something from the game, and will hope to sharpen up on their finishing for the big kick off. They began in 4-1-3-2 formation and after a scrappy start slowly began to assert themselves in the first half, with a few lively runs by Gillian Inglis and Mhairi Lyle stretching the Hearts defence.

Accies looked most purposeful when they took the ball wide, and the first great opportunity arrived on 20 minutes as Lyle got down the left edge of the Hearts area but her cut back was just beyond Joanne Paton lurking in the area.

Three minutes later and the roles were reversed, as Accies came even closer. Paton showed good pace and strength to beat her marker and pick out Lyle. She set herself and did everything right, but her shot cracked the bar and went over. 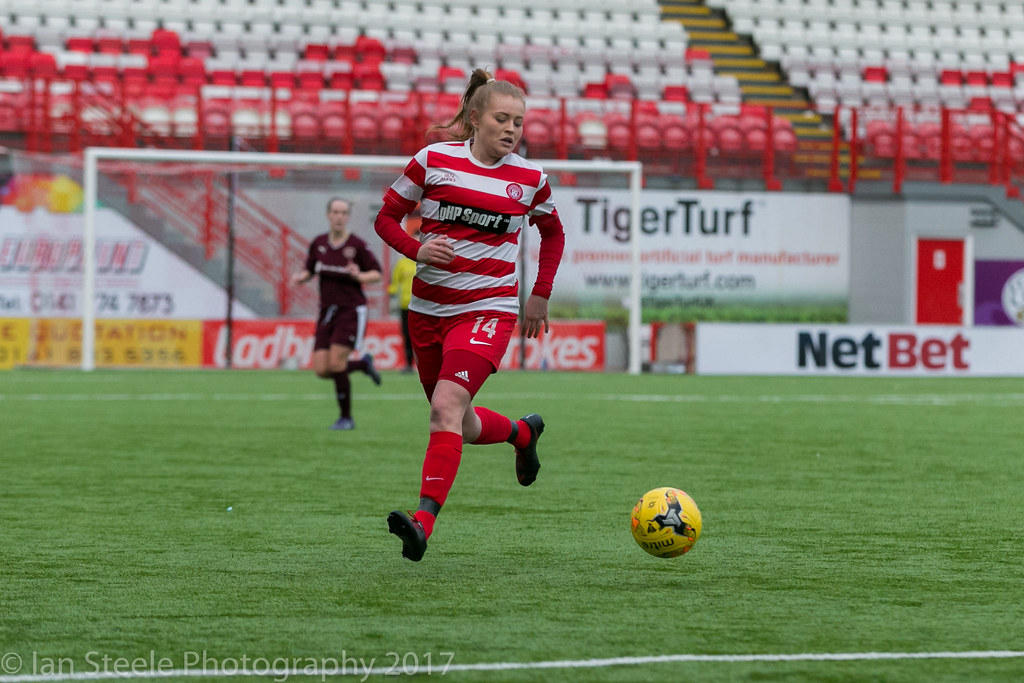 The hosts looked to be finding their rhythm as they continued to press in midfield, and their best passing move almost broke the deadlock on 37 minutes, as Lauren Kerr played in Lori Gardner down the edge of the area who squared for Paton, but the new signing’s finishing touch drifted just wide of Ashley Watson’s right hand post.

Hearts hadn’t threatened much on target at the other end, with Ashley Carse and Cara Kidd firing efforts off target. Dani Connolly was clearing her defensive lines and marshalling the home defence well, but it had been a first half of stalemate and stray passes, as two well matched sides tried to find an advantage.

Both sides wanted to give their squads a run out in this warm up, which may have counted towards the disjointed play of the second half. It was a valuable exercise in gaining competitive match fitness, as they made maximum use of their subs bench.

Paton was again the focal point for the best of the Accies attacks, providing two further opportunities for her team mates to break the deadlock. Firstly she got wide to aim a deep cross at Lyle unmarked in the box, who shot straight at Erin Rodgers.  5 minutes later and she sent Marie McGuinness clean through on Rodgers but she wasn’t able to direct her shot on target.

And it looked like this stalemate was just blowing itself out, but the visitors had one last card to play, to grab the all decisive goal on 82 minutes. From a free kick down the left edge of the box, Michaela McAlonie fired a low delivery into a dangerous area, which seemed to skid past everyone, with her team mate Dodds able to get the final touch and steer into the net.

They all count, and the visitors will have enjoyed this win after last season’s top of the table tussle. Accies will have the perfect chance to make amends as they visit Hearts in a fortnight’s time at Dalkeith.