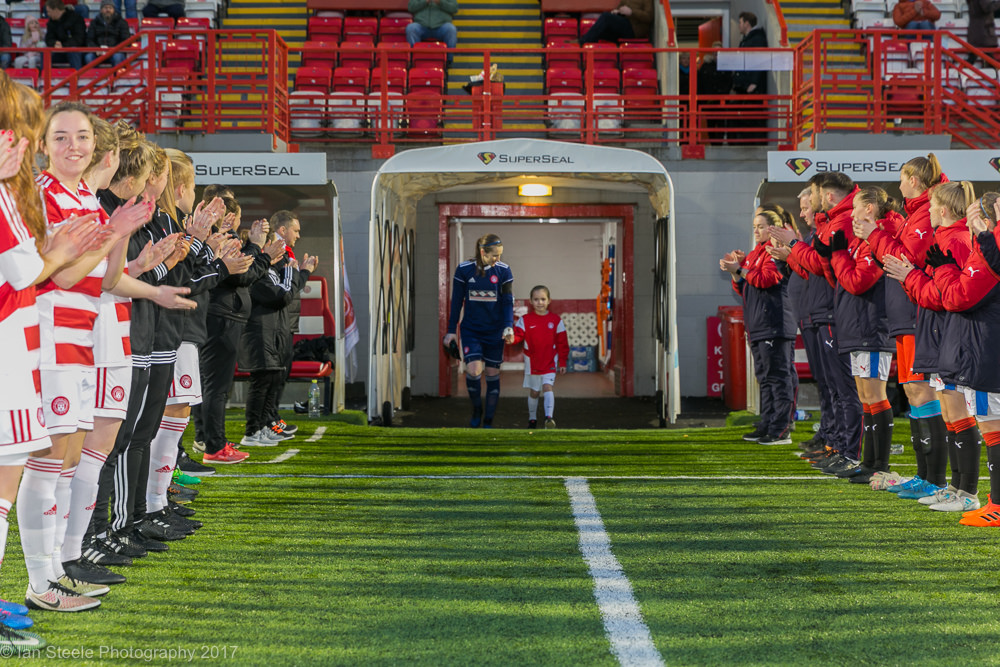 It was an eventful, emotional final match of the season, which Accies just pipped at the death. Both sides gave a fitting welcome onto the pitch to Elaine Fleming on her final appearance, going on to serve up an entertaining incident-packed match, which swung end to end. All in all, the match was a perfect script for Casper, as she saw out her long Accies career with a win, courtesy of Vaz Lyle strike. Elaine now retires with our best wishes for the future and leaves with Accies in the elite division.

the match itself perhaps epitomised Accies overall season, as we recovered from a slow start to finish strongly. And coach Gary Doctor also points to a performance typical of his retiring keeper, hoping that we haven’t seen the last of her at the SuperSeal.

“Elaine made a handling error for the Rangers goal, but then recovered with a couple of big saves which helped us win today. I hope she can stay involved with us in some way. She has been a great, loyal servant to the club. She might want to take a break from it for now, but we’ll be here for her.”

“It was a great game today. Both teams went for it, and there was no point in holding back. We were maybe more attack-minded, which is something we can perhaps look at for next season. It’s great to come back from behind, which we’ve not done for a long, long time. “ 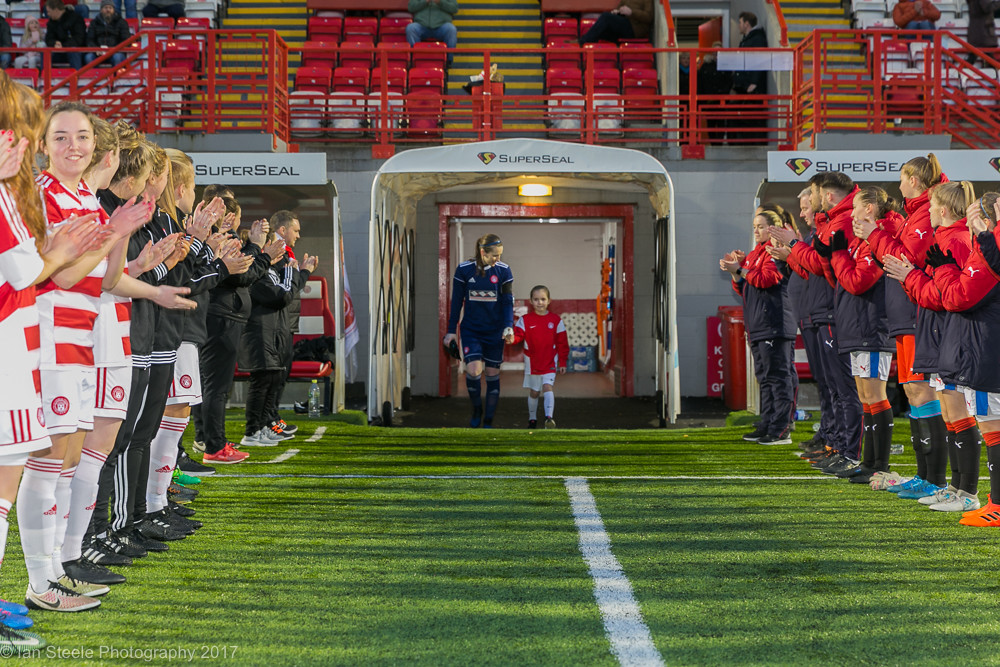 Guard of Honor for Elaine Fleming

Doctor made four changes to his side from last week’s defeat to Spartans, and we made a promising start, Kodie Hay in behind the Gers defence, but her cross scrambled away on 2 minutes. 5 minutes later a delightful flick by Teigan McCann put Lori Gardner through on goal, but she couldn’t test Elliot in the Rangers goal.

Instead, the visitors took the lead on 19 minutes, from a free kick 25 yards out. It won’t be a moment Fleming looks back on as she misjudged Claire Gemmell’s free kick, and saw it roll agonizingly over the line, however, her teammates weren’t to let it spoil the occasion.

Fleming made amends 4 minutes later, tipping wide after Emma Lyons almost diverted a Davidson cross for an own goal. We endured a rocky 5 minutes after conceding but were soon up the other end with chances of our own.

Jordan McLintock was denied by the woodwork after pouncing on a loose Rangers ball on 29 minutes. The front three of McCann, Gardner and McLintock was causing plenty of danger, with Gardner spurning a couple of opportunities in on goal. 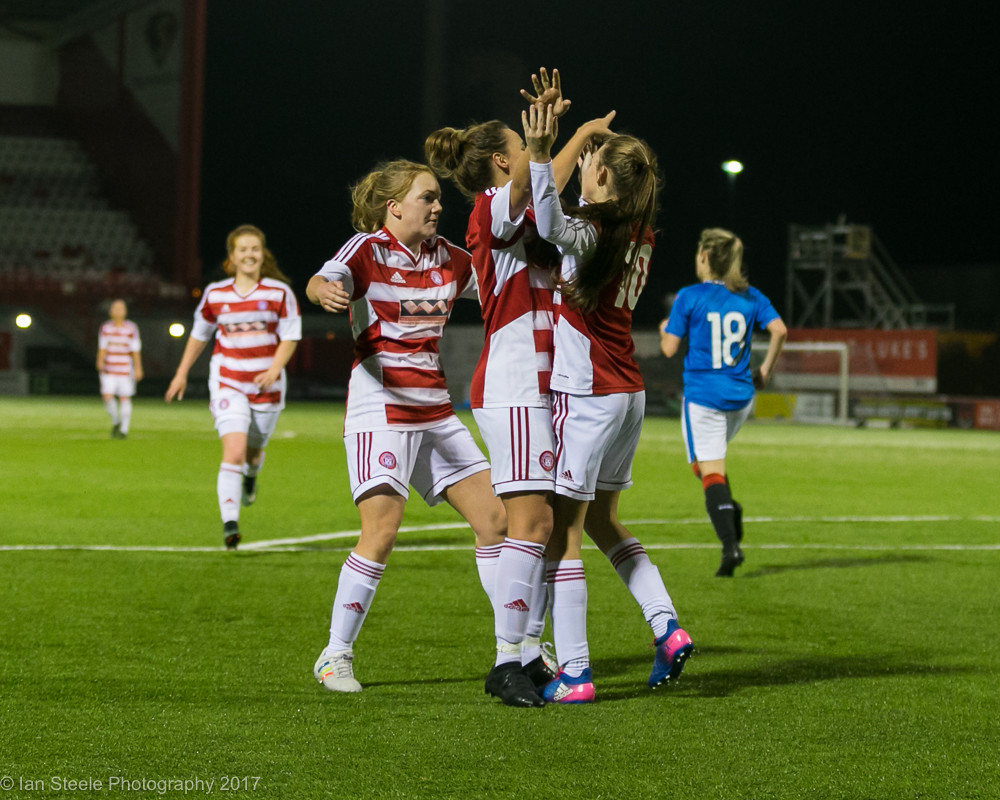 Rangers continued to look dangerous from the set piece, as Accies fouls giving Gemmell further opportunities to test the defence. We continued to threaten at the other end, though, McLintock almost scoring a goal of the season, beating half the Rangers defence, but unable to test Elliott on 68 minutes.

A minute later though, and we were level, from a well-worked move. Kodie Hay found Gill Inglis down the right and her cross to the near post was perfect for Gardner to sweep home her 6th goal of the season.

Rangers almost made an instant reply, a goalmouth scramble ensuing after an Amy Muir corner. Fleming then pulled off one final stop for Accies, somehow keeping a Hayley Sinclair shot out from point-blank range on 75 minutes.

Accies were to have the final say, though, and it was fitting that Mhairi Lyle had the final say, with another decisive goal, taking advantage of Elliott’s missed clearance to tap into the empty net. 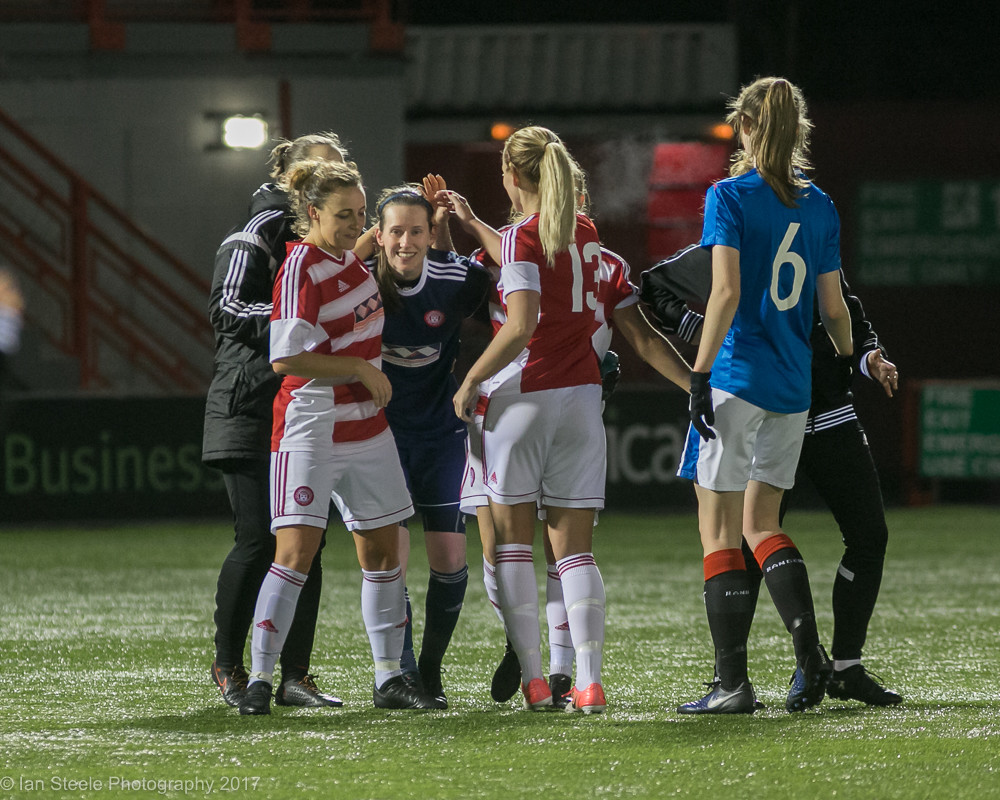 There will be changes for next season, not least in goal, but the coach has seen plenty of progress from his side, as he looks ahead to 2018.

“We’ve played well in a lot of games and not got our rewards, and definitely got better in the second half of the season.”

“We’re delighted to have maintained our league status, and get that final win also sends you away happy. There’s no break at all really. The league starts again on 11th February. No doubt there will be a few changes, but we’re looking forward to it next year, with the quality we have in the squad.”