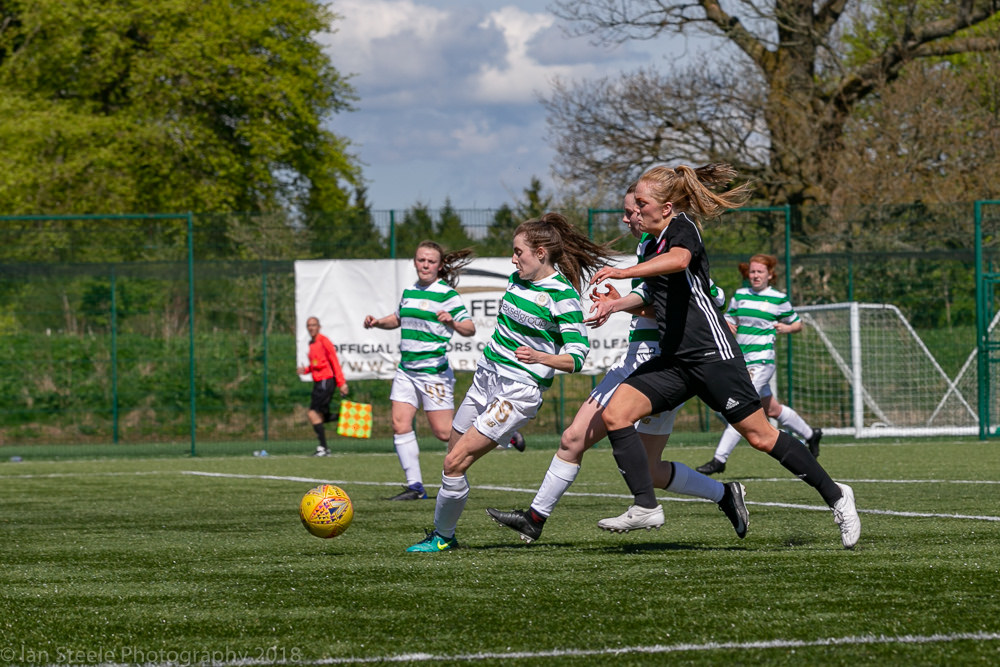 Accies Lose Out In Second Half Celtic Show

All the goals came in the second half as Celtic enjoyed a third victory over Accies this season to move up to second in the table. We remain in bottom place, two points behind Stirling University, after failing to kick on from a positive result last week.

The scoreline was possibly a little harsh, although Celtic had dominated the goalless first half. It took a little fortune in the end for the hosts to make sure of the points, but hesitant defending didn’t help Gary Doctor’s side’s cause.

“We’re disappointed because we felt better coming into the game. A couple of the goals were certainly avoidable from our point of view.”

“Celtic haven’t had a great home record this year, so we had a chance today I thought. I don’t know whether we opened up too much in the second half.”

“We made a mistake for the opener, and then lost a couple of fortuitous goals. The second goal is a blocked clearance which ricochets into our net. If that happens it’s not going to be your day.”

“There were some positives in our first half performance, but the game’s kind of run away from us in the end. We need to be defending better.”

We made one switch in midfield from last weekend’s long-awaited victory over Spartans, as Nina Fitzsimmons replaced Emma Lyons.

The Hoops meanwhile were unchanged from a convincing win against the same opponents, hoping to continue the goal glut in the sun at K Park. 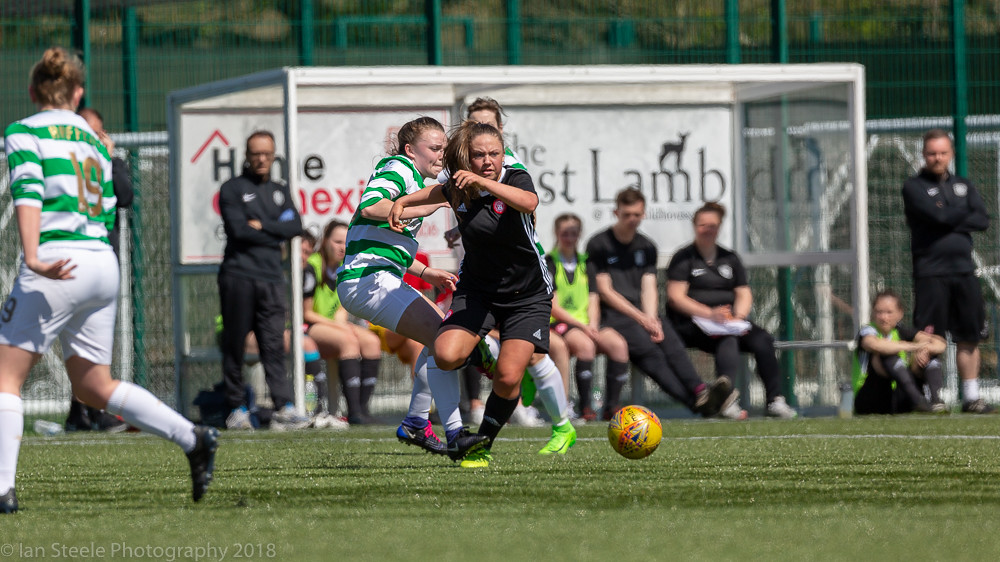 They began ominously enough, controlling the bulk of possession and pushing Accies deep. The height of Pullar and Giard caused Accies problems from the very start as we survived a few goalmouth scares.

The woodwork came to our rescue on 10 minutes, as Adams crashed Ewens cross off the bar. 9 minutes later and Pullar was clean through on goal only to chip a glorious chance over Grant’s bar.

We weathered the storm somehow, as Celtic won a succession of set pieces in promising areas but couldn’t capitalise. Pullar passed up another opportunity on 27 minutes, powering a header wide of the post, as we hung on in there.

We did get the ball up to Rice and Hay in attacking areas on occasion, but the Celtic rearguard was quick to recover and clear the danger. Lori Gardner was not to enjoy the same space to play in as last weekend. 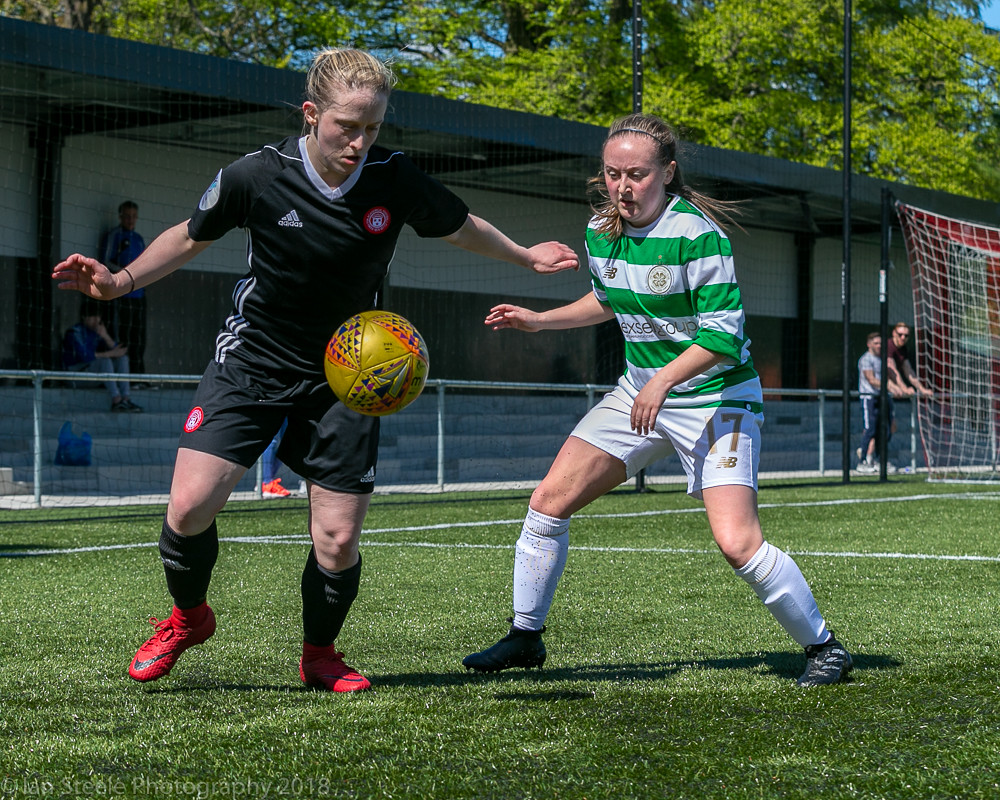 It felt like something of a victory to reach half-time level. The hope would be to frustrate Celtic as the clock ticked on. Accies looked livelier after the restart but fell behind on 52 minutes, as Celtic cut through the middle of the defence. Pullar slid it through for Giard to grab the first to first of two goals, Grant saving the first attempt but unable to stop the rebound.

Giard had her second 9 minutes later from the edge of the box, Linsday’s challenge only deflecting the ball high and wide. Grant got a touch but couldn’t prevent the ball from nestling in the net.

Celtic went on to extend their lead in the final 10 minutes. A long ball through found sub Cairney in acres of space down the left. Again Grant got a touch on the ball, only to see the ball end up in the back of the net.

Cavanagh had the final say from a corner kick with four minutes to play, as she headed past Grant from close range to make this an emphatic looking victory for the home sides.
We now head for Easter Road on Wednesday, and the coach knows what we can expect. 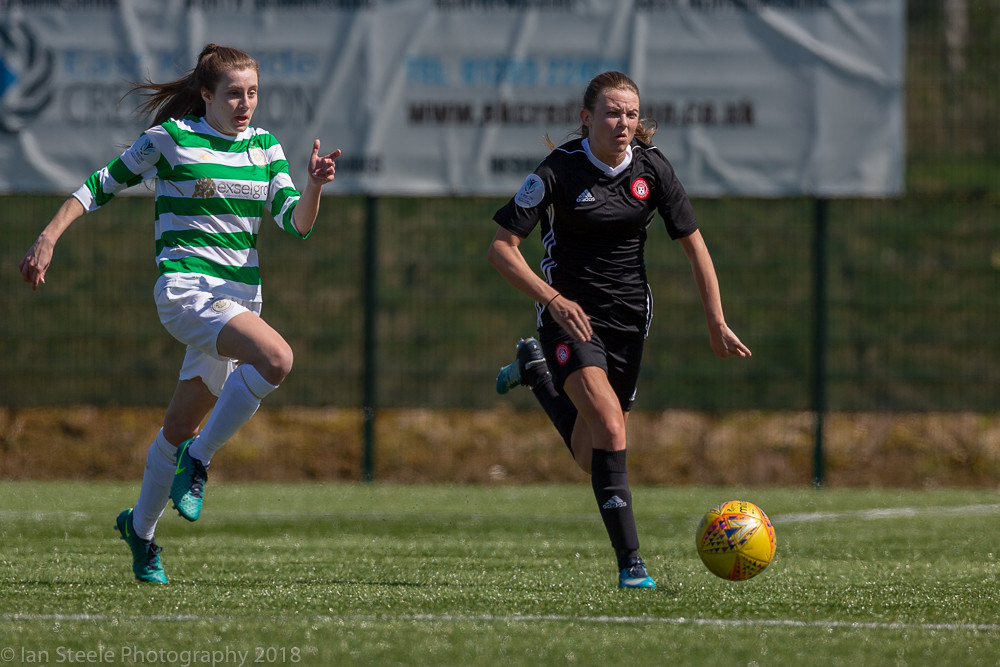 “It’ll be a very difficult game on Wednesday on a huge playing area against one of the top teams in the country. They obviously have the cup final at the weekend, with half an eye on that. It’s perhaps something we can take advantage of.”
“I can’t ask any more from the players in terms of effort. It’s just that quality here and there, we’re missing, and we’re little thin on the ground with a few players out. Hopefully, Teigan McCann and Megan Quinn will returning coming weeks.”