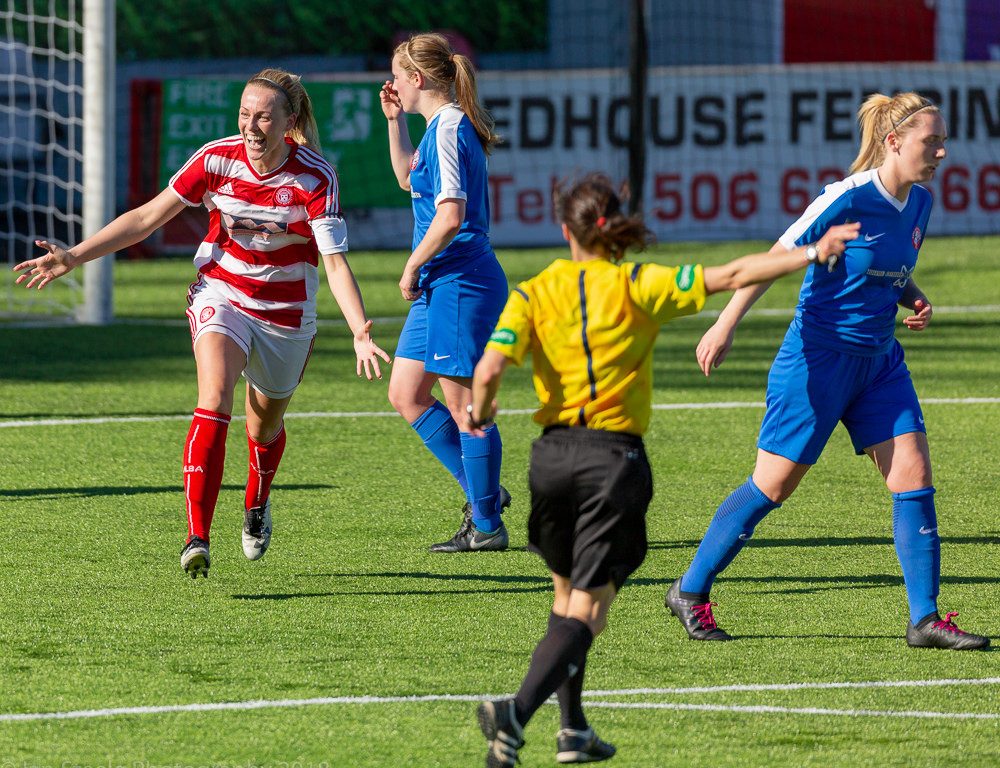 Three Points In The Sun As Accies Cruise To First Win

It’s been a tough old start to the season, but we marked the arrival of summer football with a convincing first league win of the season as the sun beamed down on New Douglas Park.

Goals late in the first half by Lori Gardner and Jade Lindsay helped close us to two points adrift at the foot of the table. Results elsewhere made victory all the more crucial and coach Gary Doctor now wants his players to kick on for more points.

“Today was just huge for our self-esteem. We’ve all felt that monkey on our back leading up to today. And it’s no less than we deserved over the 90 minutes.”, he says. 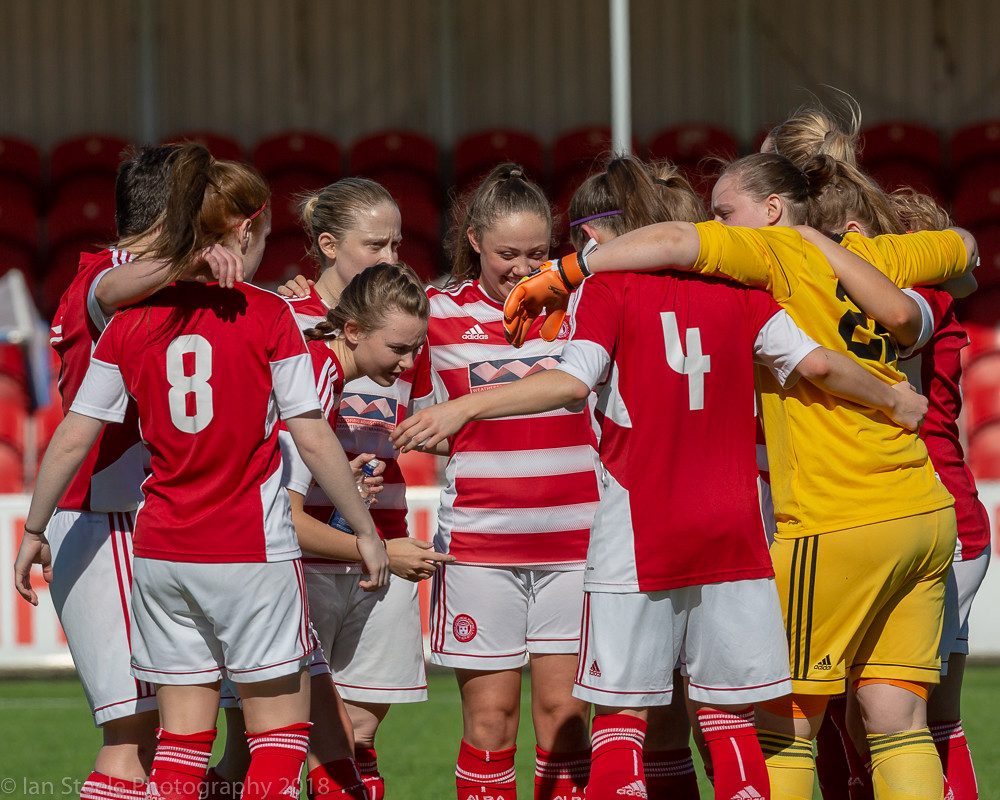 “Everyone played their part. Our front three chased Spartans down really well, and we’ve kept a clean sheet. In training we’ve tried to simplify a few things about we play, and it’s great to see hard work pay off today.”

“Lori’s opener came at a good time, right before the break. She always makes the right runs, and got to the front post. Ricey’s done really well to get the ball across.”

“It’s so different when we take the lead in a game. We got a little break of the ball in the box for Jade’s goal, also something we’ve not had in recent weeks.” 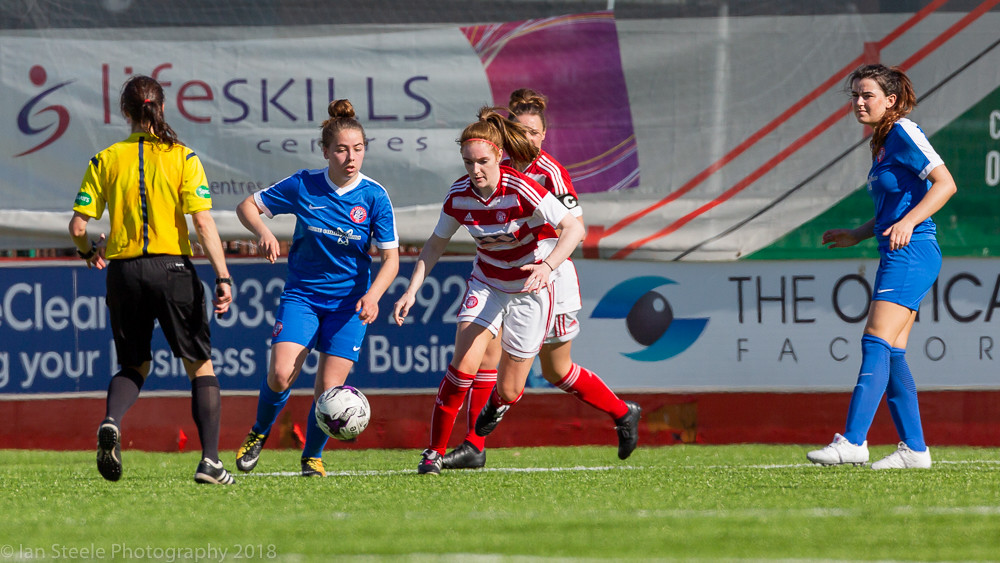 Lauren Grant returned in goal for Accies as we kept faith with outfield players for the visit of the Edinburgh side. Spartans likewise made just one change from the home draw with Stirling University, as Mason replaced Johnstone in Paul Greig’s starting line-up.

In a cagey opening 15 minutes, the visitors had the more intent going forward, a penalty claim for handball by Inglis in the box waved away by the officials. Accies took a while to settle, but began to press well in midfield as they sought openings at the other end.

Both sides had first pops from long range on 17 and 21 minutes. Katie Rice went for the spectacular for Accies, a thirty-yard chip, just over, before Walkingshaw tried something similar 4 minutes later, her shot requiring the glove of Grant to tip wide. 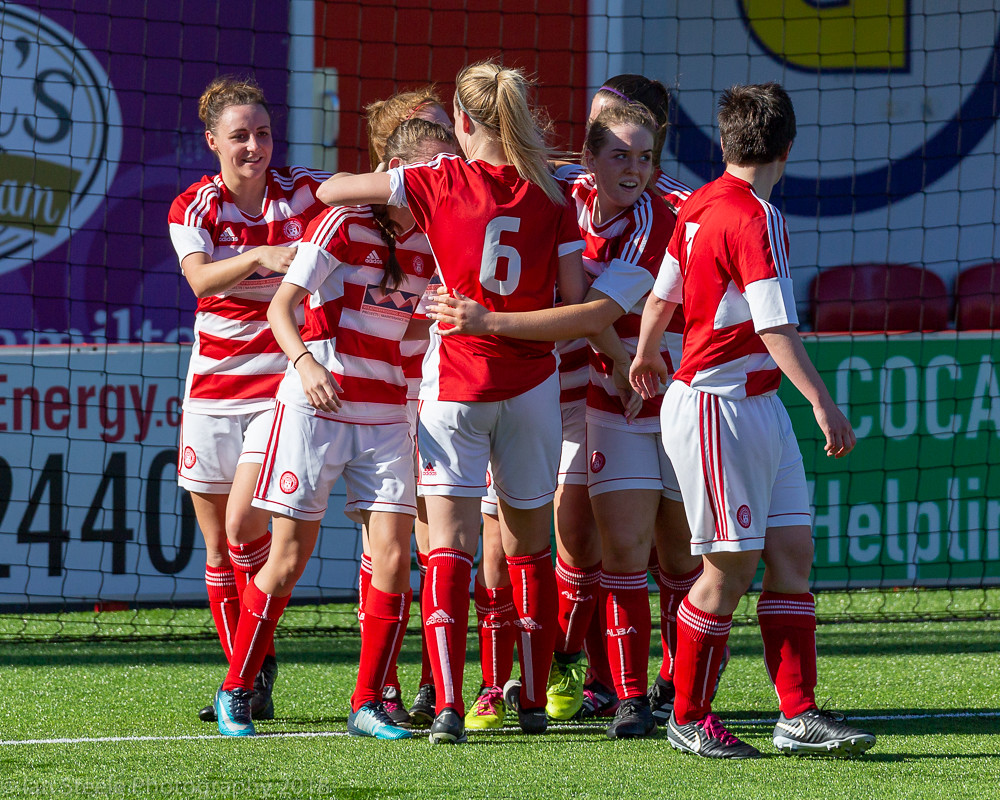 Slowly Accies began to work some more openings, pressing well and first to loose balls in midfield. Emma Lyons almost had us in front on 25 minutes, with a header from Rice’s free-kick deflected onto the Spartans bar, as we started to exert some control.

Perhaps the turning point in the game came on 38 minutes, as Grant punched clear a dangerous cross in the Accies box, with Spartans Ronaigh Douglas striker stretchered off after colliding with the Accies keeper. The injury delay seemed to disrupt the visitors as Accies went on to take full advantage before the interval.

The opener arrived after more good closing down in midfield on 42 minutes. Rice took the ball to left byeline and picked out Gardner’s near post run for a neat close-range finish.
A second arrived just two minutes later as Inglis swung another ball across from the right flank, the ball deflecting into the path of Lindsay in the box. With the Spartans defence caught out of position, she finished like a natural striker to give her teammates the perfect halftime break.

Spartans couldn’t find an answer in the second period, as Accies contained them and sought to hit on the break. The pressing game was almost rewarded two minutes after the restart, Inglis breaking up play and sending Rice clean through, the Accies forward just wide with her effort.

Gardner should have had us out of sight on 71 minutes, as Hay robbed Walkingshaw in a similar style to send her through one on one with Harrison, but the shot was skewed just wide.
With 10 minutes left Hay laid another chance on for Shearer, down the right corner of the box, Harrison this time required to pull off a good stop. Late chances for subs Russell and Johnstone at the other end might have made Accies sweat, but it was, finally, to be Accies’ day.

For the Accies coach, the hard work must continue, but with some belief and pride restored for the challenges ahead, starting at Celtic next weekend.

“I’ve just told the players to enjoy the fact that we’ve won. It’s not a feeling we’ve had too much lately.”

“Next weekend will be tough, but we can now progress with a little more belief. We’ve taken some pressure off by getting our first points and can now look forward to these games that little bit more.”