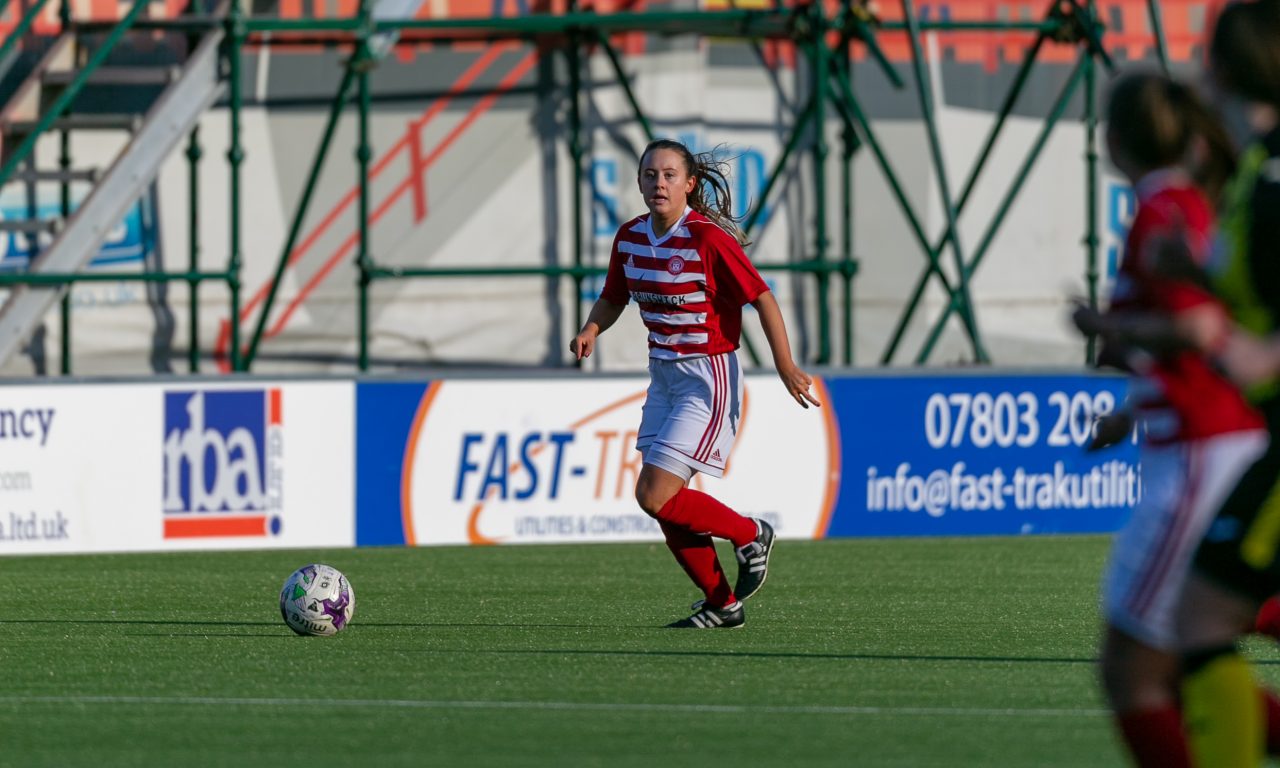 Accies Miss Out on Chance To Go Top

With no other fixtures in SWPL2 this was a golden opportunity to hit the front of the pack. But late drama at either end meant for a share of the spoils and a frustrating afternoon for coach Gary Doctor.

Accies remain in third spot, a point off the top two, having played a game more than leaders Hearts. The Accies coach gave his thoughts post-match.

“It’s a big disappointment today. Maybe the players were a bit too confident on the back of last week. We just didn’t get going in the first half.”

“I felt we were improving in the second half. St Johnstone were hanging on and got their penalty on the counter. In the end we’re fortunate to even get a point through an own goal.”

In blustery conditions, neither side got the ball down to play early on. But it was the visitors who edged the first half chances, taking advantage of some loose passing from Accies.

Lauren Grant was called into action on 10 minutes, punching away a Rachel Todd free kick. Saints should have capitalised shortly later, as Hannah Clark shot straight at the Accies keeper after we gave away possession on the edge of the box.

Chloe Muir was off target with a couple of long range efforts as we tried to settle into our passing game. But the side from Perth will have been disappointed not to lead at the break.

Jade McDonald was clean through on goal on 33 minutes, as Saints pressed Accies into another mistake their own half. Luckily Grant was quick off her line to close down the danger.

Three minutes later, another loose ball almost cost us, Todd through on goal firing just wide of Grant’s left post from the corner of the box.

It was a far cry from the goal glut of last weekend as we struggled to make an impact at the other end. But Muir finally forced a save from Cameron, as Sturrock slid her through, the Saints keeper punching wide.

Accies looked to step things up for the second 45, and it was beginning to look better. Amy Anderson had Dionne Brown through on goal 58 minutes, with Gardner almost in just after a flowing move, involving mcIntosh down the right.

But, just as we thought we had turned the tide, Saints were handed a controversial penalty on 79 minutes. Grant gathered a Saints cross, seeking to start a quick counter only to cut across Todd in the area. The referee waved away the protests and Saints striker got up to convert from the spot.

Justice was perhaps done as we levelled from an equally bizarre leveller, MT Gardner cutting inside to cross from right. Judith Shepherd stuck a foot out, only to deflect high past her own keeper.

Accies move on to another tough test, as we welcome Dundee United to the Hope Stadium this Sunday. The coach knows it won’t be easy.

“It’s another difficult game. It’s clear that every team in the league can organise well and make it difficult. Everybody’s taking points off each other. Today was a big disappointment but we’ll reflect and hopefully put some things right this week.”