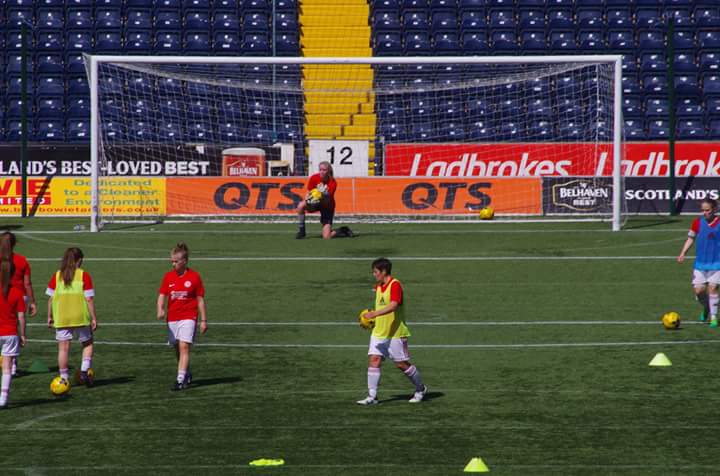 Back To Training Targeting Cup Success

It has been a long lay off due to the Euros in Holland but the players return to training next week, keen to pick up where we left off on June 18th. Our reward for the 4-1 Scottish Cup win at Kilmarnock was a home tie on August 20th with Granite City. It is our first home cup tie in 3 years and presents a great chance to reach the last 8.

No one will be underestimating the visitors from Aberdeen though, a side who won the SWPL North second division unbeaten in their first season. They sit fourth in division 1 North and will fancy their chances of causing an upset at Superseal Stadium. Assistant coach Bobby Watson underlines the need for a professional approach to the tie in just over a month’s time.

“I don’t know a lot about them individually but their unbeaten record last year speaks for itself, and they’re going well again this year.  We’ll be having them watched in coming weeks. They have only been going two years but we’ll show them due respect.”

“There is no way we’ll be underestimating them. They’ll fancy their chances to cause an upset. We’ll need to be at our best and approach the game professionally. We have put in some good performances at home this year so far. If we acquit ourselves in the way I know we can then we can get through. After that you never know, especially if we get another home draw.”

Meanwhile Accies have also had time to take stock of league form, sitting second bottom of the table. Watson doesn’t feel it is a reflection of the performances the team has put in so far.

“We deserve to be in this league but we have to go out and prove it. There’s a great core dynamic in the squad and everyone works and trains very seriously. We have played well in games but not come away with anything.”

“The two games away at Stirling University were particularly disappointing not to have points to show for it. We need to find a way to get points from good performances.”

As the build up gathers pace we will also be taking part in an end of month tournament at East Kilbride’s K Park, involving Celtic, Durham and an Icelandic team. Watson and head coach Gary Doctor also hope to be adding to the squad in coming weeks.

“We are looking to boost our options up front. It has been a lot to ask of Lori Gardner and Mhairi Lyle up front all the time. They have been great but we need to help them out. Jordan McLintock has settled in well and had a great game at Kilmarnock. I’m hoping that we’ll see a new signing over the next week or so. ”

The two coaches will also jet out to Holland next week as Scotland begin their campaign against England. Watson thinks Anna Signeul’s side have a fighting chance of reaching the knockout stage.

“England are one of the favourites to win the competition and it will be a great occasion. The crunch game I think will come against Spain in the final group match.”

“A lot of the squad are now based abroad, but it is a good advert for the SWPL to have so many home based players in the squad. Hopefully it helps attract further sponsorship and coverage of our domestic league.”