With only 3 games to go we travel to Aberdeen on Sunday knowing that a point will be enough to ensure league safety. And a dominant display at the weekend was the perfect confidence boost, as Accies defeated Rangers at New Tinto Park. The scoreline didn’t flatter us with a first half own goal and a first Accies strike for Kodie Hay in the enough to earn our first three points on the road this season.

Manager Gary Doctor now wants more of the same, with his side coming into form at a decisive point in the season.

“Obviously we want to go up there and win.”, he told Accies WFC Media after the game. “The challenge we have set ourselves is to win as many points as we can in the remaining games.”

“We’ve given ourselves a great opportunity, going up there with a seven-point gap. I think today was as well as we’ve played all year.  We’ve got to keep the same mindset, focus and concentration, going into next week.”

“I think Amy Anderson probably played the best game from anybody this season. She was just everywhere, really affecting the game, her use of the ball and work rate was outstanding. “

“Our midfield three- Amy, Deborah McLeod and Emma Lyons were also really excellent. We’ve defended really well under pressure, kept a clean sheet and stood firm. We rode our luck once or twice, which hasn’t always happened this season, especially against Rangers. “ 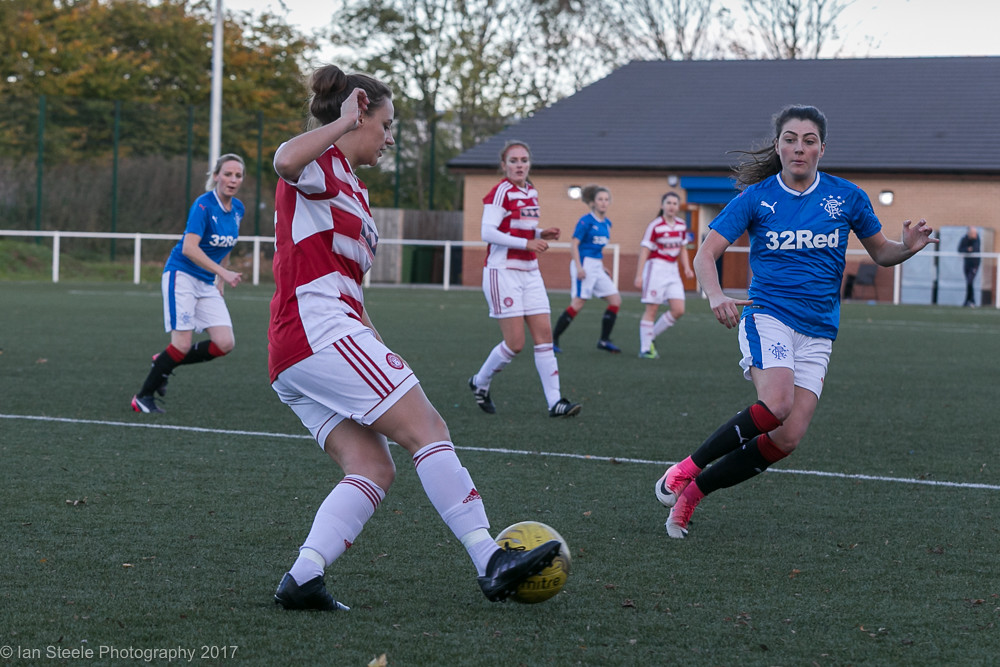 “We’re seeing the benefits now of a more settled front three, with Teigan McCann getting better every game. She’s giving us so much up front that we’ve not had this season, with the cleverness of her movement. I was also delighted for Lori and Kodie to get the goals.”

“We were almost a full strength today, with only Mhairi Lyle missing. We proved today what we can do with a full-strength side and everybody clicking. I’m really delighted.”

Gill Inglis returned to the starting eleven to captain the side, with Deborah McLeod also back to full fitness, as a solid Accies midfield slowly took a grip of the game midway through the first half. The confidence was clear from the start, as Accies won a series of corners and pegged Rangers back in their own half.

Rangers weren’t getting the space and time to play the ball out and Hay almost caught them napping on 25 minutes, closing down a clearance but shooting straight at Violez on 25 minutes.

We had the lead through 5 minutes later, as Anderson got the ball wide right and crossed for Gardner in the box. Her header took a deflection off the back of Rangers defender Rachel O’Neill to give Accies the well-deserved breakthrough.

If there was a touch of luck about the opener, we were unlucky not to extend the lead before halftime, with Anderson and Lyons coming close in a half we dominated.

The hosts lifted the tempo in the second half but the Accies defence held firm before Hay hit Rangers with the sucker punch on the hour mark. Pouncing on a loose clearance from the Rangers keeper, Anderson released McCann down the right side who picked out her strike partner to tap home.

In only her second start, Hay already looks to have settled into the side, the match carrying extra significance with her up against her sister Brogan in the Rangers side for the first time.

“It was a big day for me today. I’ve always played alongside my sister with Glasgow City, so I was nervous beforehand up against her. But it was great to get the goal, and once we settled down I thought we thoroughly deserved the win.”

“We can hopefully now go up and enjoy the trip to Aberdeen, and play like we know we can.”