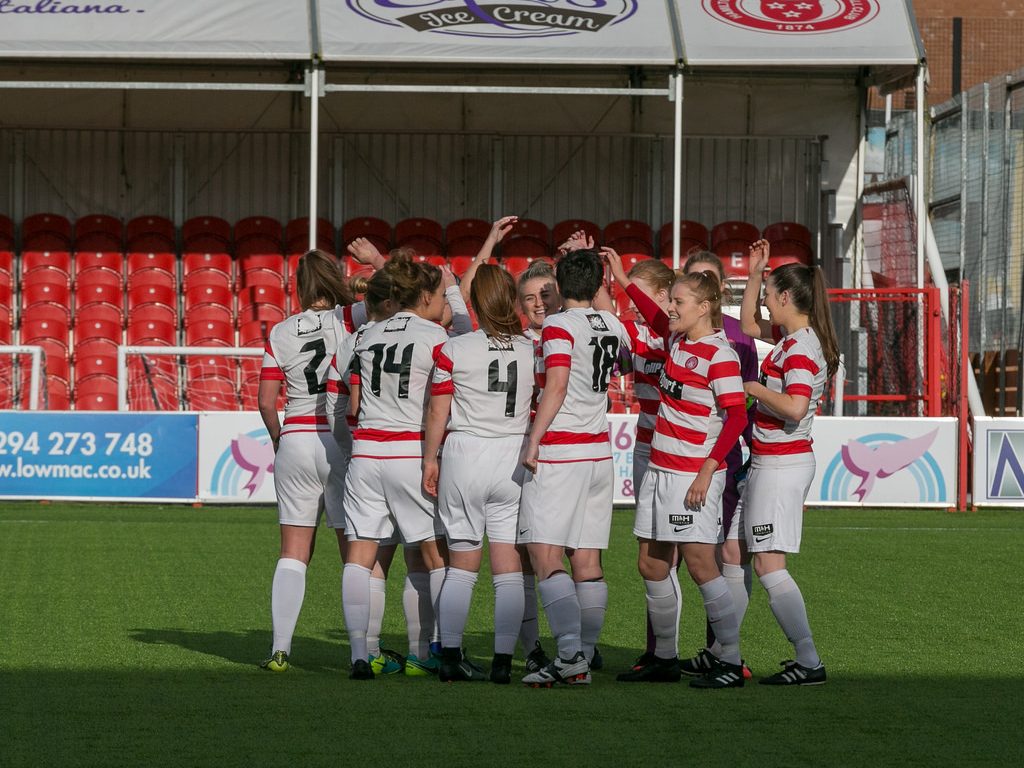 After fighting back so late to level, this defeat was an especially painful way to sign off from a frustrating league campaign to date. The league won’t resume again until August, as players head for the Euros in Holland, and Accies are left to reflect on several might have been. Creditable performances against top sides have not yielded points from the 11 matches so far. The break is a chance to take stock and work out how Accies can take something games such as yesterday at Gannochy Park.

We made two changes from last weekend for the visit to Stirling, with Dani Connolly and Amy Anderson returning to the side and Laura Gallen and Kirsty Fraser dropping to the bench. Our last visit to Stirling a month ago ended in a very narrow defeat. We knew it would be another close one but couldn’t have guessed the late drama that was to unfold on a rain-sodden pitch.

Accies showed good early impetus, winning the battles in midfield and forcing our opponents onto the back foot. After Jordan McClintock had skewed a few efforts over we took a deserved lead on 13 minutes, with Lori Gardner grabbing her first of the day, taking advantage of a mistake to fire into Logan’s empty net.

A setback followed a minute later as captain Gill Inglis had to be withdrawn after sustaining an injury. Amy Allan came on in her place but we continued the momentum for the opening half hour, albeit in a scrappy midfield battle.

The home side began to grow slowly into the game and Elaine Fleming had to be quick off her line on 33 minutes, with Pullar put clean through on goal by McDonald, but the Accies stood up to make a fine stop. It was important for Accies to see this out until halftime but Stirling equalised 3 minutes from the break, McDonald knocking home the rebound after Pullar had headed a Donaldson cross off the woodwork.

The score was perhaps a fair reflection of the run of play, with neither side able to build much momentum in the game, fought in testing conditions. Both sides emerged from the break trying to lift the tempo and it made for a much more open second half. Accies had the pick of the early 2nd half chances, with Mhairi Lyle twice through on Logan’s goal.

Firstly McClintock slid a great ball through for Lyle on 54 minutes, the Accies midfielder doing everything right, only to see her shot strike the post. From the rebound, Amy Anderson fired over the bar.

After Stirling had a chance of their own 3 minutes later, Fleming pulling off another great stop from a Russell close-range shot, Lyle was through again, this time Logan showing good reactions at the other end to stop.

The game really opened up in the final quarter, going end to end, but Stirling took the lead on 70 minutes from the spot, with Pullar adjudged to have been fouled by Dani Connolly in the box. The referee waved away protests and Gallon converted from 12 yards.

We were up against it now but battled back as we threw numbers forward. Appeals for a penalty of our own were dismissed on 87 minutes, with Jade Lindsay seemingly held in the box, but we never gave up and had a dramatic leveller a minute later, as Lindsay nodded down a McClintock cross fro Gardner to fire past Logan.

We had deserved a point but the relief was short lived as Stirling swept up the other end to take the lead again with just a minute left, as substitute Beth McKay took advantage of indecision to crash a shot in off the bar.

All in all a sickening way to lose. Afterwards, Coach Gary Doctor tried to make sense of another defeat in a game we should have taken points from.

“The players are absolutely devastated as a group. We’ve been putting in good performances against top teams but not getting points from games.”

“There’s a whole number of factors involved today. We switched off at vital times for their first and third goals. We’ve taken the game to them but ultimately the feeling is, disappointment. What’s been killing us all season is the inability to take our chances.”

With no league football until August, our final competitive game for a month comes next weekend with the Cup visit to Kilmarnock. A victory would help remove the sour taste of this latest league defeat.

“We want to finish on a high next weekend.” Doctor says. The players need to lift themselves, and we need to lift each other and rally. We’re up against a good side and we know we’ll have to be at our best.”