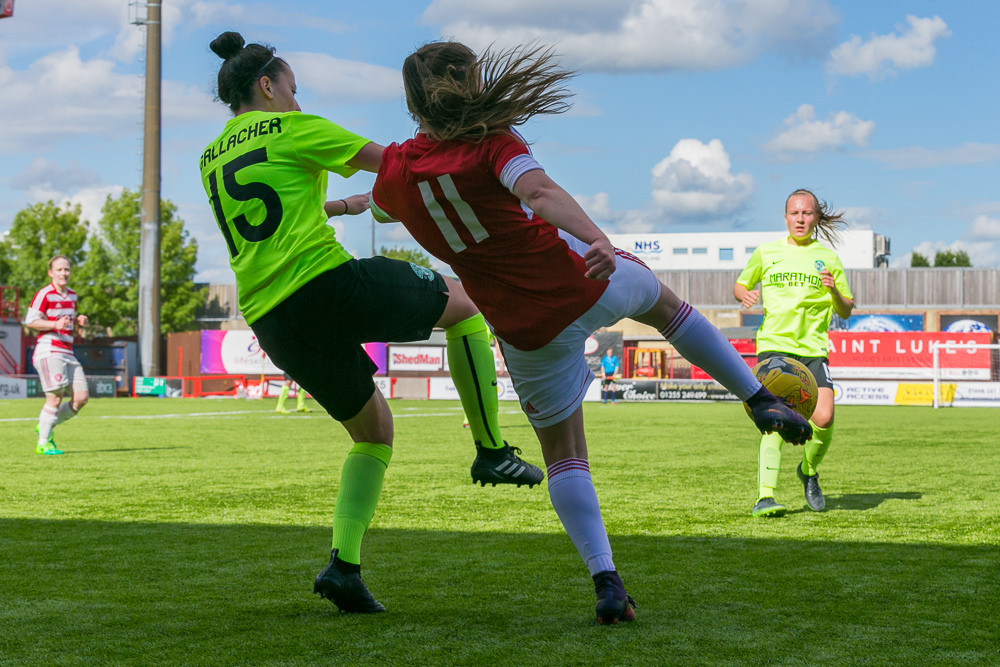 Despite defeat to the league leaders, there was plenty about Sunday’s performance to encourage coaches and fans alike. We fell behind early, during a dominant Hibs spell, but subdued our opponents for long spells thereafter. Hibs finally put the seal on their win in the closing 20 minutes, but the match might have taken another twist had we made the most of a couple of good second-half chances.

Gary Doctor had a few changes to make from last week’s lineup at Celtic. The suspended Joanne Paton missed out and will sit out the next few games, and we went with Lori Gardner on her own up front. Mhairi Lyle returned to the side in her familiar midfield supporting role. Jade Lindsay came in with Emma Lyons, replacing Dani Connolly and Amy Anderson in the starting lineup.

A strong and confident Hibs side looked like they meant business from the off. We were under the cosh with Elaine Fleming showing great reactions to tip over a McLaughlin effort on 6 minutes, with small heading the resulting corner just wide. 2 minutes later and there was another narrow escape as Smith’s cross from the left skimmed the Accies bar.

There was probably a sense of inevitability as Hibs took the lead on 14 minutes. From a similar wide position Small whipped in another ball, which this time evaded everyone in the box and dipped into Fleming’s far corner. 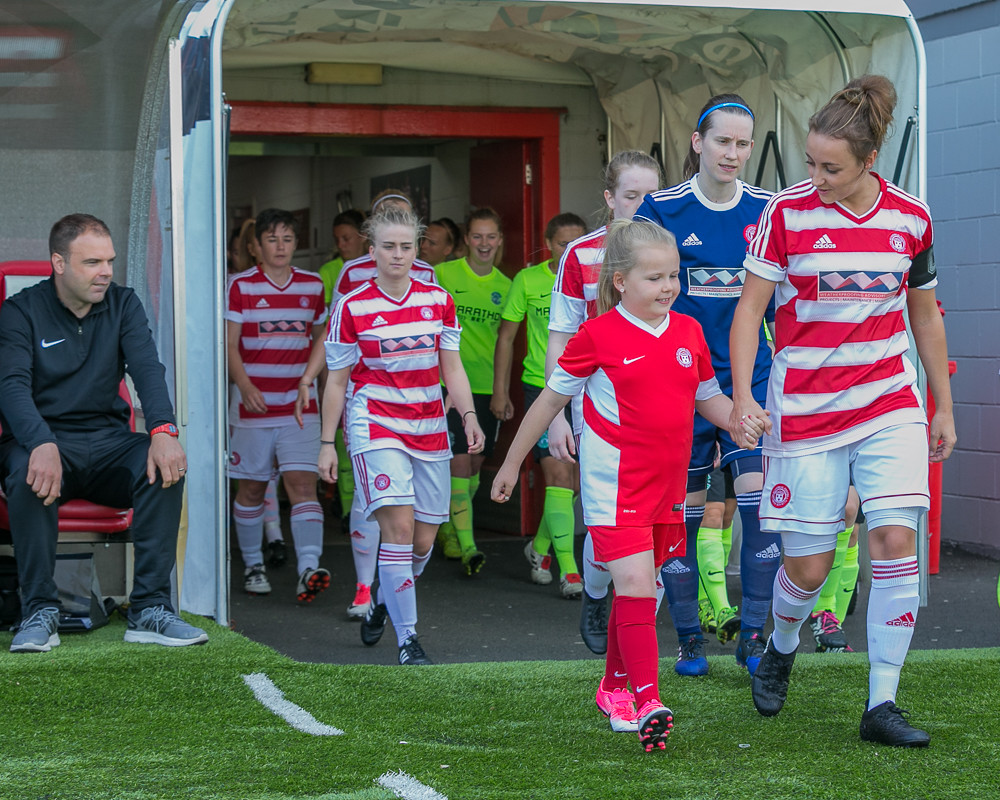 Team walk out with Mascot

We weren’t able to carve anything out by way of response, but we weathered the early storm and grew into the game as the half wore on. We were finding it difficult to get support up to Gardner with Lyle and McClintock pushed into deeper lying areas. But we kept ourselves well in the game up to halftime, closing down our opponents and biding our time.

Hibs emerged from the break energised and almost extended their lead 5 minutes in, McLaughlin firing just wide from inside the box. But our best chance of the game arrived on the hour mark, good interplay between Lyle and Gardner on the right edge of the Hibs box, but Gardner’s shot was easy for Reid in the Hibs goal.

At the other end, Hibs came close two minutes later, Abi Harrison skimming the bar from a Brownlie free-kick delivery, with Fleming getting a good glove on an edge of box Smith strike to palm over the bar.

Hibs’ established the two-goal cushion on 73 minutes, after a strong period of possession. Murray swung a cross from the right into the Accies box, and as we struggled to clear the danger, Small was on hand in a packed penalty box to shoot low into Fleming’s corner. 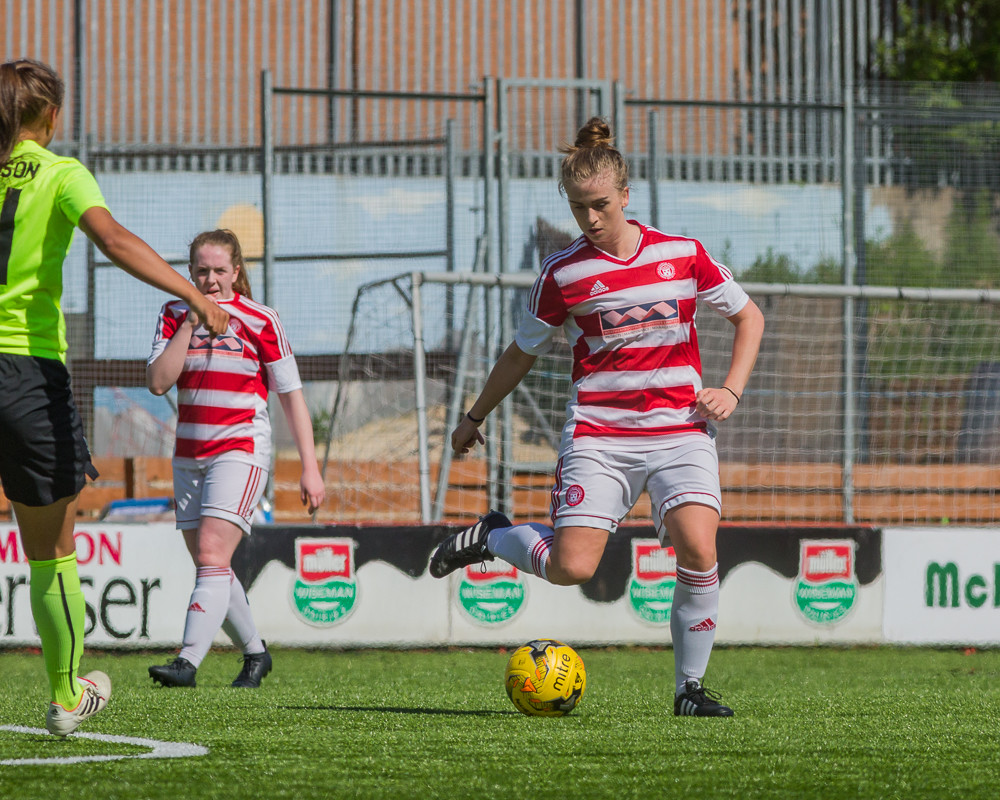 The heads didn’t drop though and we kept going at the other end, almost pulling one back on 75 minutes as an Inglis corner found Lyle in the box. Her shot was well held by Reid.

A fifth defeat running, albeit against potential league contenders. After another spirited performance coach, Gary Doctor still sees plenty of signs to be encouraged about the season ahead.

“It’s disappointing that we’ve not got anything to show from today but hopefully the performance gives the players that bit more belief.”

“You can see the improvement from early in the season. We lost heavily to Hibs through there but we matched them for long spells today. They’re a good team and they caused a lot of problems in the first 15 minutes to take the lead. I think after that we got ourselves more involved in the game and created a few opportunities of our own.”

“We just need to show a little bit more confidence in that final third of the pitch and convert these opportunities. We had a few this week and one great chance. It’s the final hurdle but also the hardest part of the game.”

“The players are definitely showing more belief and trust in each other, and we’re organised and work hard for each other. Today was just a very difficult task though against the league leaders.”

Next up is a visit to Stirling University on Sunday. It’s a game the coach and his players will be targeting points from.

“They’re another quality side, but it was close between us last time through there. There’s nothing for us to fear and we’ll look to go there and win. But we to take the same mentality with us from today into Sunday’s match.” 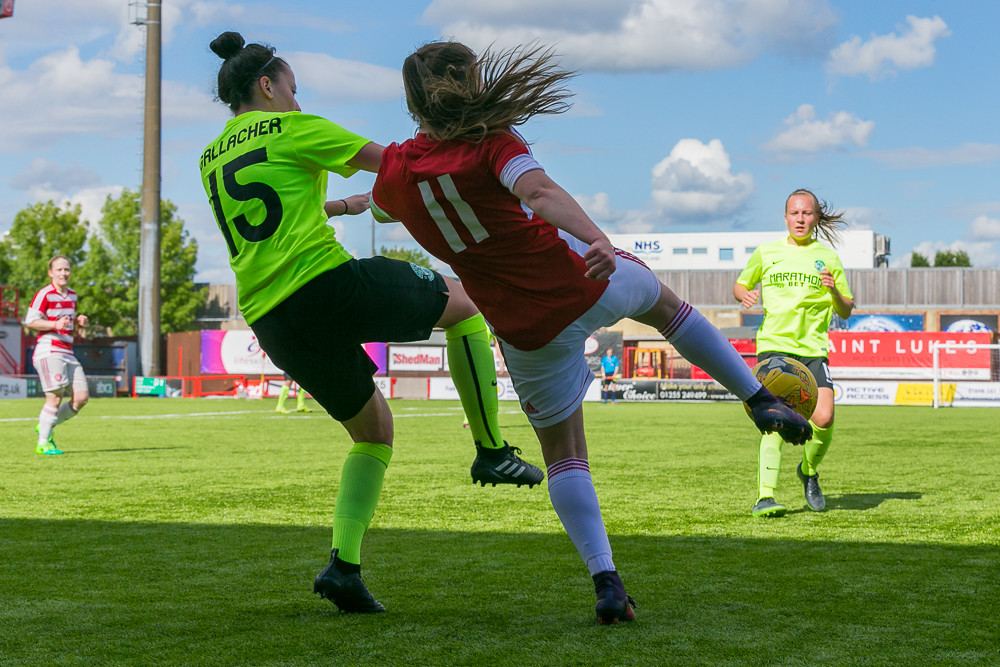