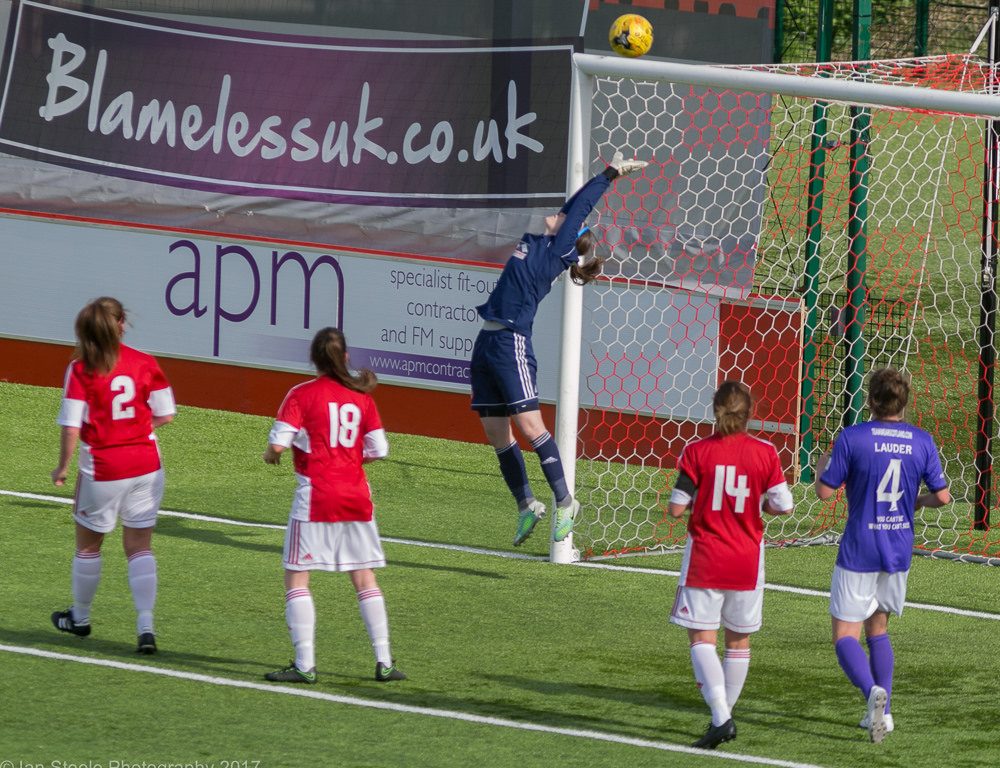 It was a fantastic team performance at the Excelsior on Wednesday and we were very unfortunate not to emerge with something from the game. Leading Glasgow City for 85 minutes it eventually took a stroke of luck for them to finally break us down. We can also point to decisions that didn’t go our way in the first half, with what appeared to be a goal that should have stood and a good claim for a penalty kick.

Accies move on now to face Celtic, in what will be another big test of our league credentials on Sunday. After Wednesday though, there is nothing to fear. Despite heartbreak at the end Coach Gary Doctor takes huge pride in the performance and sees a team which is improving all the time.

“The players were outstanding and did everything we looked for. I can see the belief and confidence increasing all the time and I can’t be any prouder of them. They give everything and we will continue to improve and get better. I have no doubt about that.”

“I suppose it doesn’t matter who you play against when you lead a game that long and not to win is devastating. When it’s a team of the quality of Glasgow City and with our history against them it’s an even greater disappointment.”

“The second half was constant pressure, however, it took real strokes of misfortune to turn the game around. It’s the players I feel for but they couldn’t have given any more.”

We shuffled the team from the Stirling University game three days before, with Megan Quinn, Lori Gardner and Emma Lyons dropping to the bench. In came Laura Gallen, Kirsty Fraser and Jordan McClintock in what was her first start for Accies.

It was a game where City was expected to have the bulk of the possession and chances, but we started positively and slowly grew into the game. Accies even had the ball in the City net after a Deborah McLeod header from McClintock’s corner was chopped off on 12 minutes. The referee indicated that he had seen McLeod leaning into her marker, but replays show this to be a very marginal call.

Shortly after this Laura Gallen went down in the box as Accies continued to surge forward. It looked like an infringement as she tried to get onto Paton’s cross but appeals were again waved away. The belief was growing though and we had the breakthrough we deserved on 18 minutes. Pleasingly it arrived from the set piece as Jade Lindsay picked out Paton in behind the City defence from a long free kick. She showed great control and composure to beat Alexander from close range.

City was stunned into action and went on to dominate possession for long spells. Accies held firm though and kept a good shape, restricting our opponents to largely long-range efforts off target. The 10 times reigning champions looked to be having one of those nights, with Hayley Lauder their brightest spark. But despite continued pressure in the second half home hopes had started to fade after Leanne Ross headed off the bar on 85 minutes.

It took good fortune for City to finally find a way through a minute later. Jade Lindsay tried to deal with a dangerous cross but could only flick past Fleming. Luck again wasn’t on Accies’ side as the hosts took the lead a minute later, Lauder’s header striking the post and out, but just crawling agonizingly over the line. Lauder’s clincher arrived in the closing stages, a shot from the edge of the area, taking advantage of tired Accies legs and heads.

After such a huge effort at Airdrie, this was another brutal reminder of life in the top division. But it was a performance that proves it is where we belong, as thoughts now turn to another massive game at Celtic on Sunday.