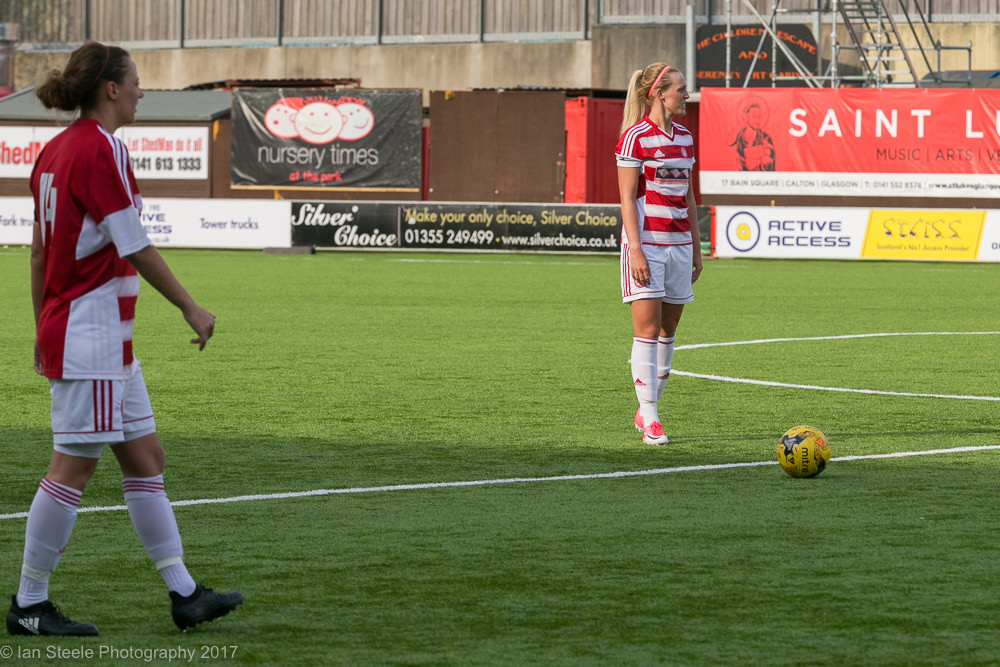 Narrow Defeat on A Bumpy Pitch

The narrowest of defeats at Stirling University leaves us second bottom of the SWPL after a tight contest at Gannochy Sports Centre. Jade Gallon’s goal on the half-hour mark was eventually just enough to win the three points for the home side, in a game of few clear-cut chances.

After last week’s disappointing loss to Rangers, Coach Bobby Watson was at least encouraged by the response and battling qualities from his side, as we look ahead now to a testing visit to Glasgow City tomorrow night.

“We had a bad 15 minutes in the run-up to halftime last week, and it was the same today. I was pleased though that we stuck together after the goal and got through that difficult spell until the break.”

“Over the piece, I still thought we were the better side, always on the front foot. It’s just that last piece of quality we’re missing in the final third.”

“Stirling was very direct and it was difficult to get the ball down on a bumpy pitch and move it as we’d like to. We tried to play switches and get in behind them but the final ball wasn’t there today.”

“I’m a bit disappointed in our set pieces as well, which we had been working on through the week. With a bit of luck when Gill Inglis struck the woodwork we could have been level in the second half. Their goal came from the one moment of quality in the game, and to be fair it was a great goal.”

It arrived on 30 minutes from Gallon’s rampaging run through the heart of the Accies defence, playing a neat one-two with Nicole Pullar down the right edge of the box to beat Fleming with a low finish. Shortly later the hosts struck the bar, with Gill Inglis coming closest for Accies right after halftime, again striking the woodwork.

After this defeat, it doesn’t get any easier as we move on now to a second game in three days. Accies may consider rotating the side for the visit to the Excelsior Stadium on Wednesday night, in a game where they can expect to spend long spells without the ball.

“We need to take care of our players and ensure everyone is fresh for every game. It’s a lot to ask going from a tiring and tough grass pitch straight to back the astro. We’ll see how we are in training but may make a few changes.”

“I’m firmly convinced that we will improve this season. I don’t think we’re a million miles away. There’s a long way to go this season and we’re not concerned about the league position at this stage.”

We also hope to add to our squad in the coming weeks. Accies have looked short up front and are close to confirming the arrival of a new striker to provide that extra cutting edge for the fixtures to come.

Tomorrow will be a tough examination but Watson and his players wouldn’t have it any other way and will take a positive approach, especially given the last meeting with Glasgow City.

“We gave them a game of it last time at the Super Seal, and there’s no reason why we can’t compete again. Everyone knows the quality they have with so many internationals. We just need to focus on ourselves, staying switched on and hanging in there. We’re a strong, resilient group and will give it our best shot.”